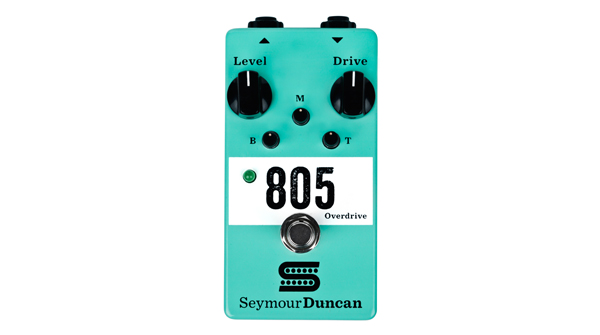 The 805 is a very transparent, classic Overdrive pedal designed using the chip found in the legendary 808 as a starting point but eventually ending with the MC33178, a chip we felt had superior sonic characteristics along with a lower noise figure and longer battery life. The 805 features an expanded gain range and 3-band active EQ that is not commonly found in 808 style overdrive pedals. It's so versatile that you can use it for a smooth, lyrical bluesy overdrive one minute and a modern metal crunch the next. We started with the classic overdrive tones we all know and love but we tightened up the bottom end and added more sparkle in the highs as well as more detailed note articulation. Whether you're after ringing cleans, a subtle boost, fat crunch, or even screaming sustaining solo tones, it's all in there. And unlike other overdrives that become thin when you refine the gain, the 805's 3-band active EQ lets you take back control over the low end while also fine-tuning the mids and highs.

The 805 Overdrive can be used to give your sound a boost with full overtones or to provide harmonically rich heavy gain with warm tube character. It's extensively developed and refined to be the perfect overdrive for pushing the front end of an already distorted amp, giving you plenty of output and tone-shaping capability whether you play hard rock, prog, metal, djent or whatever other heavy styles you'd like to throw at it. Whether you're running it into a clean channel or an utterly angry one, the sound remains natural and responsive. Like the Dirty Deed and Vapor Trail, the 805 is assembled at the Seymour Duncan Factory in Santa Barbara, California and is true-bypass.