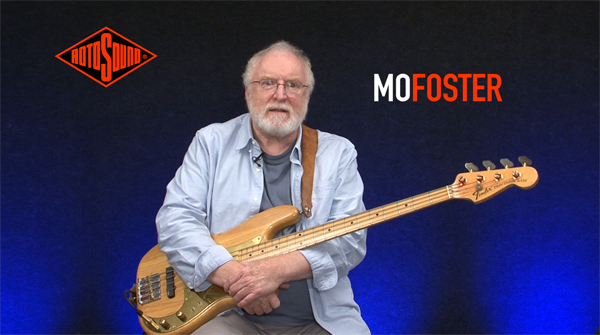 The new channel launches with thirteen new videos featuring Mo and Simon demonstrating a wide range of Rotosound strings in different playing styles. The video’s, which are shot in super high definition with crystal clear sound, includes details on the history strings and useful background information on what they’re made of and the famous musicians that have played them. If you’ve ever wondered for example the difference in sound between a flatwound and roundwound strings these videos give you a definitive point of reference.

The videos featured include classic Rotosound bass strings such as the Tru, Jazz and Swing bass sets. There are also videos on their best selling electric guitar strings Rotos and more recently launched strings such as the British Steels, Nexus and Pure Nickels. Finally you can watch Simon demonstrate the acoustic Jumbo King, Tru Bronze and Super Bronze sets. What better way to help you decide on which strings you want to use than to hear a top pro play them so you can compare the difference side by side.

Music producer, songwriter/composer, author and session musician Mo Foster has been a top British bass player for over forty years. He has recording with artists as varied as Phil Collins, Jeff Beck, Meat Loaf and Nigel Kennedy as well as touring with Eric Clapton, Van Morrison and Sting. His book ‘The British Rock Guitar’ is critically acclaimed and he is a regular columnist in many music magazines.

Predicted to be the next Irish guitar hero in the footsteps of Rory Gallagher and Gary Moore, Simon McBride has undeniable guitar artistry combined with a fine voice. He has recently supported Jeff Beck, Joe Bonamassa and Joe Satriani. His latest CD Crossing The Line was included in the Best of 2012 selection in Classic Rock and “The Blues” magazines and it was also nominated for a Blues Blast Award.

To watch these never before seen videos go to YouTube RotosoundTV.

For further details on Rotosound, their strings and endorsees, please visit www.rotosound.com