Ronnie James Dio Tribute Album 'This Is Your Life' Announced 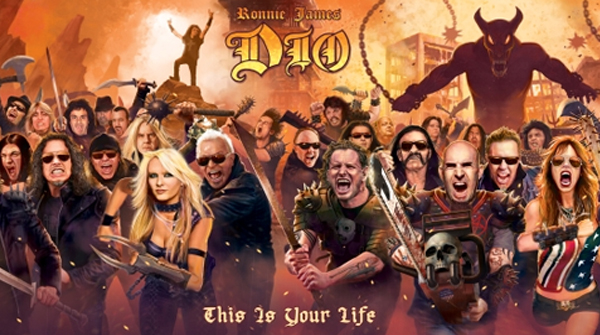 Ronnie James Dio Tribute Album 'This Is Your Life' Announced -

A new album paying tribute to the iconic metal vocalist Ronnie James Dio, entitled 'This Is Your Life', has been recorded and is set for release on April 1st via Rhino Records.

The album features contributions from a heavyweight line-up of musicians including Metallica, Motorhead, Scorpions, Anthrax and Judas Priest's Rob Halford along with appearances by several musicians who performed with Dio over the years.

All proceeds from album sales will go to the Ronnie James Dio Stand Up and Shout Cancer Fund.

Metallica posted the following message regarding the album to their Facebook page:

"Throughout the years, we’ve made no secret of our deep love and admiration for Ronnie James Dio. Whether it was with Rainbow, Black Sabbath, Heaven & Hell or Dio, his powerful voice was instantly recognizable and his music inspired and influenced the four of us tremendously.

"When we were asked to be a part of a tribute album for Ronnie, of course we immediately said, "fuck yeah!" Choosing a song to record, however, was a much harder decision. So we did four! Our contribution to "Ronnie James Dio: This Is Your Life" will include the medley we call 'Ronnie Rising,' comprised of Rainbow’s 'A Light In The Black,' 'Tarot Woman,' 'Stargazer'" and "Kill The King'."