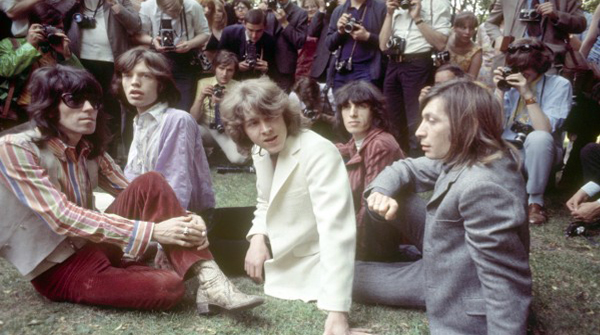 Eagle RockEntertainment has announced details of the release on DVD andBlu-ray of The Rolling Stones 'CrossfireHurricane.'

Available on May 21, 2013, 'Crossfire Hurricane' is thekaleidoscopic new film that documents the key periods of theRolling Stones' career and their incredible journey.

With never-before-seen footage and fresh insights from the bandthemselves, the film will delight, shock and amaze longtimedevotees, as well as a new generation of fans, with its uniquelyimmersive style and tone. Crossfire Hurricane places the viewerright on the frontline of the band's most legendary escapades.

Bonus features on the DVD and Blu-Ray include previouslyunreleased concert footage -  "Live in Germany '65", NME PollWinners concert footage from 1964 and 1965, a new interview withdirector Brett Morgen, "The Sound and Music of CrossfireHurricane", footage from The Arthur Haynes Show (1964), and thetheatrical trailer

'Crossfire Hurricane' received its worldwide premiereat the London Film Festival in October, where Mick Jagger, KeithRichards, Charlie Watts and Ronnie Wood all hit the red carpet tothe delight of fans and media from all around the world. The filmreceived a similar premiere in the U.S. the following month, hostedby HBO at the Ziegfeld Theatre.

Asked in a formative interview in the film what it is that setsthem apart from other groups, Jagger says with quietunderstatement:

"A chemical reaction seems to have happened."

"You can't really stop the Rolling Stones, you know when thatsort of avalanche is facing you, you just get out of the way." It'sbeen happening ever since, and the life and times of the RollingStones have never been as electrifyingly portrayed as they are inCrossfire Hurricane."