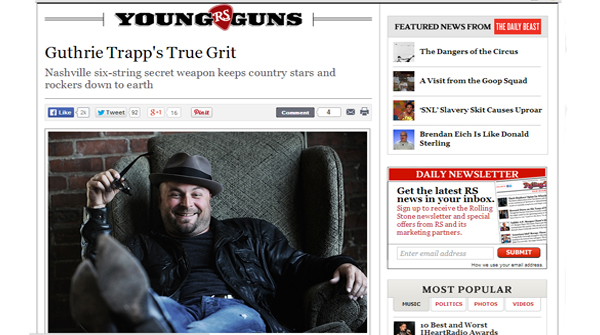 New York based guitar string manufacturer D'Addario is teaming with Rolling Stone magazine to launch 'Young Gun', a new online initiative that gives the next-gen of guitarists a glorious opportunity to showcase their playing prowess via www.rollingstone.com.

(PRESS RELEASE): For more than 45 years, Rolling Stone has celebrated guitar heroes like Jimi Hendrix and Eric Clapton. In an effort to welcome a new generation of players, Rolling Stone has partnered with guitar string manufacturer D'Addario to identify up-and-comers with the potential to become the next class of guitar legends. Rollingstone.com will launch an entirely new editorial franchise called Young Guns dedicated solely to celebrating new talent. The list, curated by Rolling Stone's top editors, will feature thirty notable players, introducing one new artist each week. The artists highlighted will be profiled and interviewed and viewers will be able to experience their inspiring performances via video and audio clips. Additionally, seven of these musicians will be chosen to participate in a D'Addario-sponsored jam session with guitarist Matt Sweeney; a robust video component that will also be posted within the Young Guns hub.

The first artist to be profiled is Nashville-guitarist Guthrie Trapp, whose online tribute is now live at RollingStone.com, and additional guitarists will be celebrated throughout the thirty-week program.