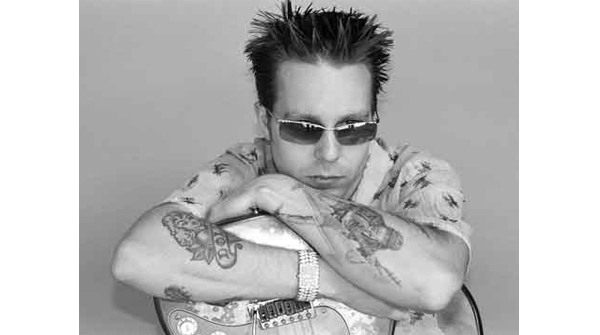 Guitarist, songwriter and vocalist Nick Curranpassed away on Saturday, October 6th, at his home in Austin, Texas,it was announced by his management. He was 35 years old.

Curran was a powerhouse performer who drew inspiration from theblues and rockabilly artists of the 50's and became renowned forhis uncanny knack of authentically recreating the feel, vibe, andswagger of classic R&B and rock.

He cut his teeth playing with rockabilly legends RonnieDawson and Kim Lenz. A native of Maine,Curran moved to Dallas and immersed himself in the Texas rootsmusic scene, eventually releasing two albums on the Texas Jamboreelabel, Fixin' Your Head and Nitelife Boogie.  As he would doon all his albums, Curran used vintage recording equipment and aone take technique to achieve not only the sound but also the feelof vintage 45s.

His national debut, 'Doctor Velvet on Blind Pig,' wasreleased in 2003 to critical acclaim, with a number of publicationscalling it the album of the year.  It also attractedinternational attention with rave reviews in the U.K. and Germanyand a "Best New International Blues Artist" award inFrance.

Meanwhile, Nick and his band, the Nitelifes,were generating an ever-growing buzz with their head-turningperformances at festivals and clubs across the country, including astunning performance at the 2003 San Francisco BluesFestival.   Calling him a "don't missperformer," Blues Revue said, "Internet discussion boards areshot through with postings and excited conversations by stunnedpeople who just saw Nick and his band for the first time."

A twenty-first century hybrid of Little Richardand T-Bone Walker, Curran displayed a veteran'smastery of the nuances of roots rock and blues idioms, yet did itin such a way that made the familiar sound startlingly new. With his raw, powerful voice and stinging guitar, he quicklyestablished himself as one of the freshest, most exciting newtalents on the scene.

Doctor Velvet included guest appearances byCurran admirer Jimmie Vaughan (who called him "just a totalass-kicker").  The album went on to win the W.C. HandyAward, blues music's most prestigious award, for "Best NewArtist Debut." Nick Curran and the Nitelifes released theirsecond Blind Pig album, Player!, in 2004 but the band broke upshortly afterward when Nick  was asked to join Kim Wilson'slatest reincarnation of The Fabulous Thunderbirds, just in time torecord the band's Painted On release.

He toured with the T-Birds for three years, andalso worked on side projects such as Deguello, a blues/punk combohe formed with another T-Bird alum, Ronnie James, and a punk/rock'n' roll band named The Flash Boys.  In 2008 he performed foursongs in a scene in the HBO Series "True Blood."

His last album, 'Reform School Girl,' was released in2010 on the Eclectro Groovelabel.  That year he was also diagnosed with oral cancer,and had been undergoing treatment until succumbing over theweekend.

"We were all very saddened to hear the news of Nick'sdeath.  He was an extremely talented musician and a very sweetguy.  A truly gifted artist, he captured a golden musicalmoment in time and made it his own."