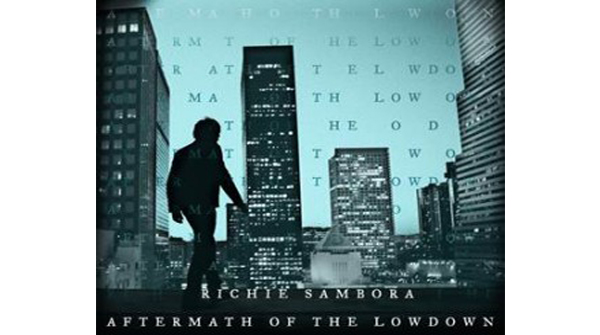 Founding Bon Jovi guitarist, RichieSambora has spent the best part of three decades asan integral member of one of the world's most iconic rock bands.However, along the way the New Jersey born guitar hero has alsoreleased two solo efforts in the form of 1991's 'Stranger InThis Town' & 1998's 'Undiscovered Soul.' Now heis readying the release of his third solo outing , entitled,'Aftermath of the Lowdown' which will be released nextmonth (Sept.18).

The new record will feature 11 tracks including new single'Every Road Leads Home To You.' It was created withSambora's long-time friend, producer and songwriter,Luke Ebbin who said of the newalbum,

'this collaboration gave him [Sambora] the artistic freedom tocompose a more personal collection of songs than thestadium-filling chart monsters that made him famous.'

'Aftermath of the Lowdown' has all of the gutsy spirit,soaring guitar parts and rousing melodies that make Sambora a musiclegend. Lyrically, he tackles the universal tribulations ofdivorce, substance abuse, single parenthood, independence andself-reliance.

"A lot has happened in my life over the last ten years,personal stuff that's cathartic for me to get out," saysSambora.  "Really things that could happen to anybody, butI just happened to be in a band with the biggest concert tour inthe world, and in the glare of the public eye."

In related news Sambora will be kicking off a series of UK datesin Amsterdam on October.9, he then plays Berlin before arriving inthe UK to perform at the Shepherd's  Bush Empire onOnctober.13.
Tickets are available at www.livenation.com

Full track-listing is as follows:

1. Burn That Candle Down
2. Every Road Leads Home To You
3. Taking a Chance On The Wind
4. Nowadays
5. Weathering The Storm
6. Sugar Daddy
7. Always Walk Beside You
8. Seven Years Gone
9. Learning How To Fly With A Broken Wing
10. You Can Only Get So High
11. World