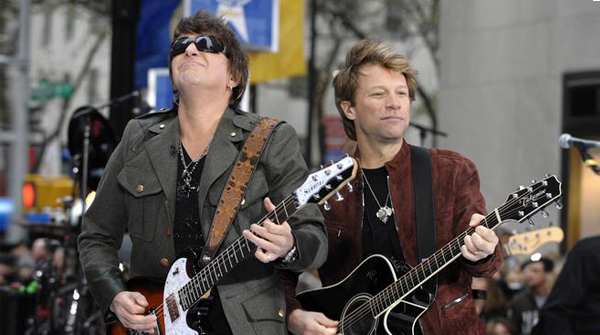 Bon Jovi has revealed that guitarist RichieSambora will be absent from the band's current run ofgigs.

In a statement the band explained the guitarist has"personal issues" and will not appear. However they madeit clear that all planned shows will go on as scheduled.

"Richie Sambora won't be performing for a while. I had two choices- pack up and go home or give you everything I go"

According to local radio station Q107 the singer went on to makeclear that the guitarist was not in jail or hospital, and that thedecision was taken to appear without Sambora a few hours prior tothe event kicking off.

However Sambora seemed quite intent on appearing as planned lastThursday, when he tweeted:

Sambora missed a number of shows back in 2011 after checkinghimself into rehab with drug and alcohol problems.

Bon Jovi himself said of Sambora:

"It was great for Richie to go and take care of himself,knowing full well he was not being fired or punished. He needed andwanted to seek help.

"But the show goes on. I'm not beholden to anyone. To behonest about it, we've got to pay a road crew, who are dependent onthat pay check to put food on the table and shoes on their kids'feet. You can't put them out of work."

The band has offered refunds to any fans who purchased ticketsexpecting to see Sambora.