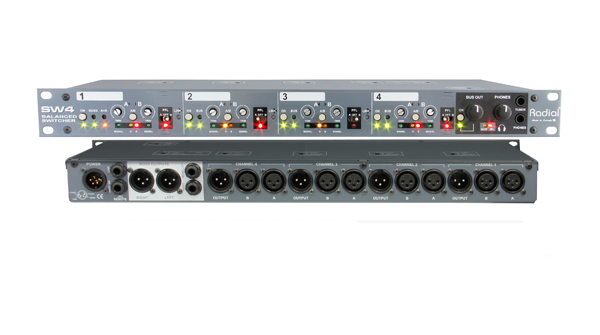 Radial Engineering Ltd. introduces the Radial SW4, a unique multi-channel switcher for balanced audio signals that enables four input pairs to be switched individually or be linked together to create stereo, tri-channel or quadraphonic switching should the need arise.

Radial's President Peter Janis explains: "Over the past several years we have been increasing our focus on providing various types of switchers for microphones, preamps, guitars, amplifiers and backing tracks. Today, the majority of artists employ wireless microphones in their live shows along with in-ear monitors. More recently, guitarists have been replacing their stage amplifiers with digitally generated devices such as Fractal's AxeFX. Considering most electronic devices employ internal computers to do the work, backup systems are now becoming essential for professional touring. Computers are certainly more stable than they were in days gone by, but on stages where high voltage lighting is abundant, power spikes can pose problems. Another concern is brownouts due to fluctuating power generators that can cause havoc with digital systems. The Radial SW4 is an advanced switcher that can be configured to back up wireless mic systems, wireless guitars, stereo backing tracks or even be used to switch or combine mixing consoles in a festival environment."

The design begins with four dual-input channels equipped with two balanced XLR-F inputs and an XLR output on the rear panel. Each output is Eclipse transformer isolated, to prevent hum and buzz caused by ground loops, and is capable of handling up to +20dB at 20Hz without distortion for the most demanding pro-audio applications. This is supplemented with top-mounted ground lift switches on each channel. Looking at the front panel, each of the four channels is equipped with a channel-on switch, A/B select with LED indicators, signal presence LEDs and individual trim controls to match the signals. The SW4 is also equipped with a stereo bus that lets the user combine the active outputs to a single mix point and exit the box via two dedicated balanced XLRs.  The same bus drives two unbalanced guitar outputs should the SW4 be used with wireless guitar systems. A top-mounted level control enables the tech to adjust the guitar amp output to suit.

The SW4 is outfitted with a built-in headphone amp that can monitor the main bus or be activated using a 3-position PFL switch to monitor the active source or the standby device. This, for example, lets the technician check a wireless microphone before handing it off to the artist.  In addition, Channel-1 is  equipped with a summing input switch to enable two sources to share the same output.

Finally, each of the four channels may be linked so that they all switch together. You could, for instance, have channels 1 and 2 linked for stereo use and then use 3 and 4 independently. When linked, channels 1 and 3 show up on the left stereo bus while channels 2 and 4 show up on the right. A master mono sum switch on the top cover brings all the active channels on the bus to both outputs. A dedicated mono-summed tuner out on the front panel can be used for monitoring or for tuning guitars. Switching can be performed via the front panel or with the JR-2 remote. This dual function switch is available in a choice of footswitch or desk-top models to control AB select and master mute.

Construction follows Radial's legendary road-worthy construction with 14 gauge steel throughout, baked enamel finish, steel encased switches and steel shafted potentiometers. As with all Radial products, the SW4 is made in Canada and covered by a 3-year transferable warranty.