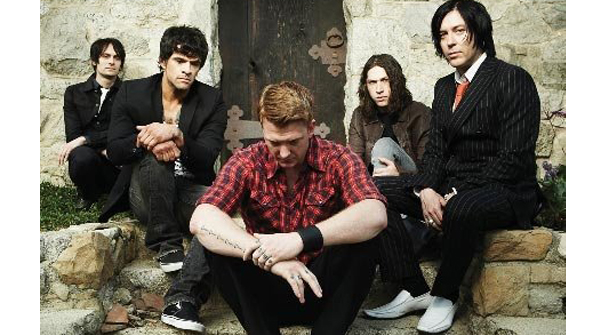 Queens of the Stone Age continue with theirrather cryptic promotional campaign for their much anticipated newalbum.

The stoner-rock set, who's last album 'EraVulgaris' was released in 2007, have now sent afourth letter to a UK based music magazine that is once againlittered with abstruse clues and messages that eager fans have nowbegan analysing.

The first letter was published by Mojoin December (2012) with the band then sending further letters toboth NME andUncut in January of this year. However,the most recent has been issued toKerrang! and reads:

ON THIS RECORD WE CAME TO A REALIZATION: THE BESTTRICK OFALL, IS NO TRICK AT ALL

THE SONGS ARE A REAL TIME DOCUMENT OF THE MANIC UPS ANDDOWNS OF THE LAST YEAR. IT CAN'T ALWAYS RUN LIKE CLOCKWORK. SORATHER THAN CONTROL THE DIRECTION OF THE RECORDINGS, WE DECIDED TORIDE SHOTGUN ON OUR EMOTIONAL BANDWAGON. WE EMBRACED OUR EVIL, HELDTHE HORRIBLE, LICKED THE LUNACY AND BLEW THE BEAUTIFUL. AS ARESULT, WE'RE ON CLOUD 9.

I CAN'T WRITE ANYMORE CAUSE MY PHONE'S DYING,

QUEENS OF THE STONE AGE"