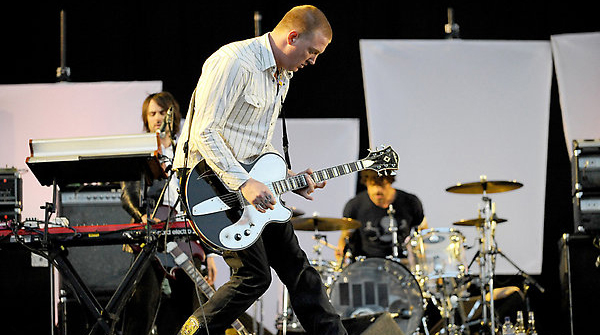 The Palm Desert rockers will release their much-anticipated newalbum, '...Like Clockwork', through theirnew label home, MatadorRecords in June and are planning on embarking on a mammothworld trek in support of the new record.

Any details regarding the tour are yet to be announced, howeverJosh Homme and co are set to perform aplethora of festival dates throughout 2013 kicking off this weekendat LollapaloozaBrazil.

Over the past few months the Q.O.T.S.A have crypticallydrip-feed fans and the music press with details of the forthcomingalbum and a new press release confirms a number of guest stars setto appear on the new album, including ArcticMonkeys' frontman Alex Turner,Dave Grohl, Elton John,Trent Reznor and JakeShears of Scissor Sisters.

Previous Queens Of The Stone Age collaboratorsMark Lanegan and ex-member NickOliveri will also appear on the album along withUNKLE's James Lavelle.

'...Like Clockwork' was recorded at PinkDuck Studios in Burbank and produced by frontman Joshua Hommealongside the rest of the band.