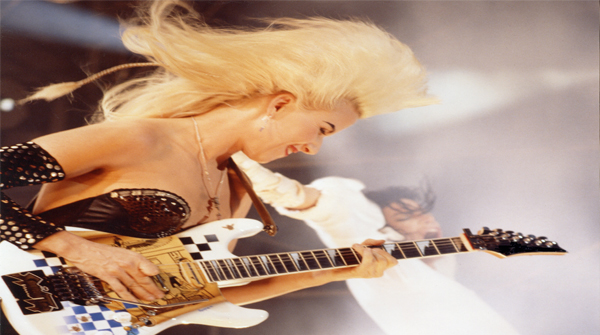 The London Electric Guitar Show has announcedthat the world-renowned session player and solo recording artist,Jennifer Batten, will be joining theline-up for this year's electric invasion of London.

Jennifer's distinct tone can be heard across the back catalogueof the King of Pop, Michael Jackson, and Brit guitar hero, JeffBeck. Jennifer, notable for her shredding alongside Jackson forover 10 years, and the infamous Super Bowl performance of 1993,will be playing her only UK performance of 2012 on the main stageof The London Electric Guitar Show on Saturday10thNovember and then holding a one-off masterclass onSunday 11th.

Aside from her session work, Jennifer is a critically acclaimedsolo artist, releasing a number of albums with producer,Michael Sembello (Stevie Wonder's axe man).Jennifer will be playing in support of her third solooutput, Whatever, which includes a multimediaextravaganza and forms the basis of her innovative approach to liveshows, paying homage to her own solo work and former musicalpartner, Michael Jackson.

Jennifer's main stage performance will bring together over twodecade's worth of musical experience, multimedia effects andsoaring guitar wizardry in an exclusive showcase for TheLondon Electric Guitar Show this November.

Jennifer joins Richie Kotzen and SorenAndersen across the weekend.

Tickets on sale now from www.londonelectricguitarshow.com