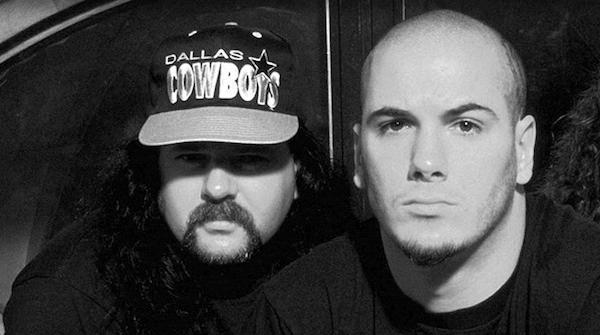 Down and former Panterafrontman Phil Anselmo has opened up onhis rift between former bandmate and drumming colossus,Vinnie Paul.

Anselmo, whose ongoing feud with Paul has been well documentedthrough the years, was speaking with LoudWire about his forthcoming solo album 'Walk ThroughExits Only' when the interview turned to toward the vocalist'srelationship with Paul and what he would say if he had the chancefor a heart-to-heart with his former bandmate:

I would let Vince Paul know that I love him very much, and Iwould apologize to him for his misinterpretation in notunderstanding where I was coming from in my lowest point in ourcareer. And then I would definitely touch upon how much lack ofcommunication played a big role in our breaking up. A lot of thatis on my back, which I've completely f-in' owned up to. But I'm notsure the rest of them have owned up to their side of things,especially Vince, when it comes to communication.

At least in my life, I cannot hold onto grudges. It's awaste of energy, a waste of time. And really, and I feel stronglyabout this, after we lost Dimebag in such a horrific way, I justcannot help but feel that Vinnie Paul's entire healing processcould have been helped a lot more had he reached out to Rex and I,and we could have healed somehow together - whether you want tocall it 'healing' or not. But if we would have really focusedtogether on this thing and come out of it as brothers - because weare brothers - in certain ways we could have formed an evenstronger bond together. But that did not happen and I think it'shurt us.

Put it this way, I don't ever expect Vince to bend or breakon his stance at all, I really don't. But if ever given the chance,man, to get straight back to your f-in' question, I would justreally give him all the apologies, I'd tell him I love him and thenI would say, 'Look, let's get down to differences now. You're gonnahave to hear my side of it. Take it or leave it, because you canleave it - you've already locked it out for x amount of years.What's the harm in hearing me out one on one, away from everybody?What's the harm?'

I have no anger toward Vince. No one can question a person -really he saw Darrell get shot. That's a scarring thing foranybody. I wish it can be seen for what it is and that blame didnot have to fall on anyone's head or any circumstance. Becausereally it was a psychopath who had a hard-on for Pantera and it'svery well-known fact between Rex and I, between my family andmyself - we all had to go through a lot of soul searching - but itcould have been Rex, it could have been me, it could have beenVince. It was Darrell that was murdered and it's just the way ithappened. I could say, "I wish it would have been me'" or anythinglike that - I can say a million f-in' things, man, and it stillwould not bring Dime back.

I think it would mean a whole lot to a whole lot of peopleif one day Vince and I and Rex could all sit in the same room andwork things out to the best of [our] abilities. I think everyonewould breathe a great big sigh of relief, but the sad thing is Ijust don't see it happening."