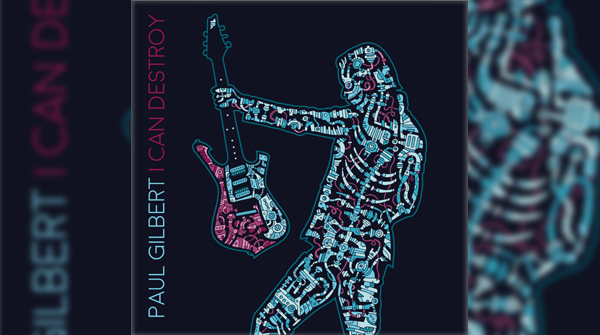 (PRESS RELEASE): It’s a question every artist has to grapple with: if you’re not pushing yourself creatively, how can you grow? And that’s exactly what acclaimed guitar maestro Paul Gilbert tackles with fervor on his 17th solo album, I Can Destroy, set for release May 27 via The Orchard. As an added bonus, fans who pre-order the album will receive an automatic download of the title track, “I Can Destroy.”

“My guitar playing was born from playing in my teenage heavy rock bands,” Gilbert explains. “After playing for 40 years, I’ve been able to evolve the way that I see the fretboard, and how I hear the guitar in my head. This opens up my soloing, and also my writing. I couldn’t have written this music when I was a kid. I couldn’t have written these lyrics either. I needed time to live…to experience joy, and anger, and love, and frustration at people who don’t use their turn signals.”

It’s no accident that I Can Destroy cuts a wide swath of styles and textures, from the full-frontal assault of  “Everybody Use Your Goddamn Turn Signal” to the jazz-blues lament of “One Woman Too Many” (which also features GILBERT’s patented four-pick Makita drill-bit riffery) to the radio-friendly balladeering of “Love We Had” to the smoking-hot gut/heart punch of “I Am Not the One (Who Wants To Be With You),” the latter track’s title a playful reference to the ubiquitous #1 hit GILBERT enjoyed as part of his gig as lead guitarist for the still-going-strong Mr. Big.

Gilbert knew that I Can Destroy producer Kevin Shirley (Led Zeppelin, Iron Maiden, Rush, Joe Bonamassa), whom he previously collaborated with on Mr. Big’s 2011 release What If, would push him to do his best from the get-go. “One thing I knew about working with Kevin as a solo artist is that there weren’t going to be that many overdubs on the record — not that many takes, and not many fixes,” he reports. “As a musician, that puts the fear into you. It’s a good fear, and it made me want to prepare in a pretty healthy way.”

With Shirley onboard to get behind the board, Gilbert next had to cull together some top-drawer musicians to bring into the studio. “On drums, we’ve got Thomas Lang, who’s somewhat of a drumming legend, and on bass is Kevin Chown,” details Gilbert. “He was the only guy I’d never worked with before, and he was great. He played all the right stuff. He’s played with everybody from Chuck Berry and Little Richard to Sebastian Bach.”

Ultimately, the joy Gilbert expresses all throughout I Can Destroy celebrates the freedom and creativity he enjoys as a solo artist. “I do my best. It’s pretty incredible to have been living the dream and putting food on the table by banging it all out on an electric guitar,” he concludes. “This is actually my 30th year as a recording artist, and I still enjoy the search. I like looking around, trying to find things I haven’t done yet, and then seeing if I can do them.”

In other news, Paul Gilbert recently announced details for his Great Guitar Escape 3.0 which is being held July 25-29 at the Cambria Pines Lodge in Cambria, CA. Packages are available at the event’s official site, www.GREATGUITARESCAPE.com.

For the camp’s third year, the legendary shredder went all out and invited a few iconic friends to join him as guest instructors. These include Megadeth’s Kiko Loureiro and Dave Ellefson as well as former Guns N’ Roses guitarist Ron “Bumblefoot” Thal [Art of Anarchy], Andy Timmons [Danger Danger], and Bruce Bouillet [Racer X, The Scream]. This all-star lineup will be hosting workshops, reflecting their signature sounds and styles and offering an immersive experience for 75 campers. Moreover, they’ll be jamming, performing, and hanging with you 24/7. About the Great Guitar Escape 3.0, Gilbert comments,

“I really feel like we got the best lineup possible for version 3.0. Each instructor brings something extremely unique to the table. You’re going to learn, feel inspired, and most of all have a great time. This is four days of complete and total guitar immersion. We can’t wait. Get ready!”

If I Can Destroy is any indication, Gilbert is on the right path to continue creating material that’s clearly built to last.