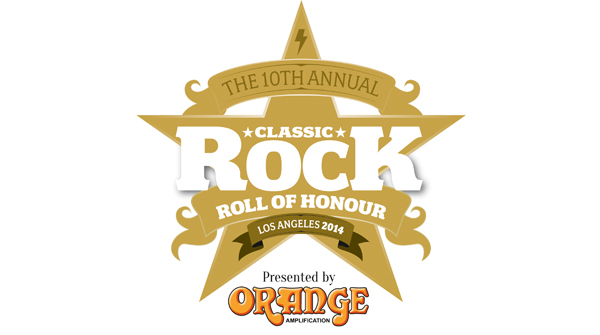 (PRESS RELEASE): For the fifth consecutive year Orange Amplification is delighted to be the presenting sponsor of the 2014 Classic Rock Roll of Honour awards.

The awards will be held at the prestigious Avalon in Hollywood, California on Tuesday 4th November. Now in its tenth year, the event is one of the most highly respected music award ceremonies of the rock and roll calendar, attracting the biggest names in the business.

Grammy Award winner and member of the Rock and Roll Hall of Fame, Sammy Hagar will host the star-studded ceremony which will honour some of the world’s greatest classic rock bands in one of the most iconic rock cities on the globe. Previous hosts include Alice Cooper, Gene Simmons and Duff McKagan.

The prestigious Living Legend award is also sponsored by Orange Amplification and this year it will be presented to Rock and Roll Hall of Fame inductee and icon Gregg Allman. Commenting on the award Gregg said “I am so very honored to be receiving this award from Classic Rock. The magazine is one of my favourites and they are always so generous to me and the Brothers.” Previous winners of the Living Legend Award include: Jeff Beck, Alice Cooper, Jimmy Page, Lemmy Kilmister, Ozzy Osbourne, Iggy Pop and ZZ Top.

“It is always exciting to be involved with one of the most highly respected music award ceremonies in the world” said Cliff Cooper, founder and CEO of Orange Amplification “and for the awards to be hosted in Los Angeles for the first time with so many ambassadors up for awards again makes it doubly so.”

Orange have been associated with many rock legends over the years and it is no surprise that The Classic Rock Roll of Honour nominations include many of their ambassadors. Orange nominees for The Best Band Award include Blues Pills, Deaf Havana, Blackwolf and Purson. Fighting out for Album of the Year are Rival Sons with their timeless fourth album ‘Great Western Valkyrie’ and Glenn Hughes' new supergroup California Breed with their self-titled album, one of the most critically acclaimed albums of 2014. When Glenn Hughes plugged into an Orange AD200 bass amp he said “it was as though it had been designed for me!”

To find out more about the Classic Rock Roll Of Honour and vote for your favourites head, here.

To find out more about Orange Amplification, their endorsees and the gear they use, visit www.orangeamps.com