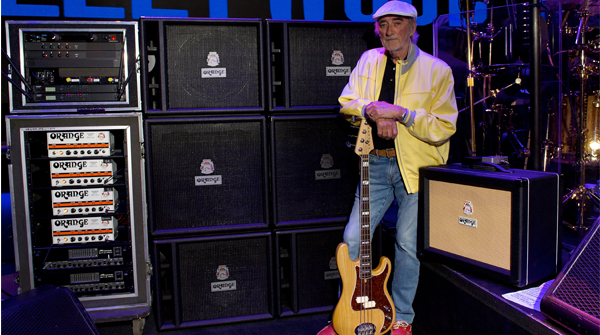 (PRESS RELEASE): Orange Amplification is pleased to announce that Fleetwood Mac bassist John McVie has become their latest Ambassador. John co-founded the band along with drummer Mick Fleetwood, and the pair has gone on to form a lasting partnership that has long been regarded as one of the best rhythm sections in the history of Rock music.

Talking about becoming a new Orange Ambassador John stated, "The guys at Orange, have really put together a great amp system for me. It truly delivers the punch, bottom end and quality of sound that makes it a pleasure to hear night after night."

John McVie's bass legacy has anchored one of the biggest bands in the world, leading to his induction into the Rock and Roll Hall of Fame in 1998. He has provided one stellar bass line after another for Fleetwood Mac, through a multiple of line-ups that includes the classic 1970's group, which created the timeless hit albums Rumours and Tusk. He is now using Orange bass heads, together with Orange OBC115, OBC410 and PPC112 speaker cabs. He joins a roster that includes many other legendary bassists such as Geddy Lee and Glenn Hughes.

After more than forty years at the top, Fleetwood Mac are still as popular as ever. This year sees them take their 'On With The Show' world tour across Australia, New Zealand and Europe. The performances showcase hits and classic songs drawn from albums that have sold in excess of 100 million copies and that span their whole career. The list of tracks includes 'Go Your Own Way', 'Dreams', 'Tusk', 'Second Hand News' and 'Think About Me' to name but a few.

Find out more about John McVie and Orange Amplification, its products and its artists.