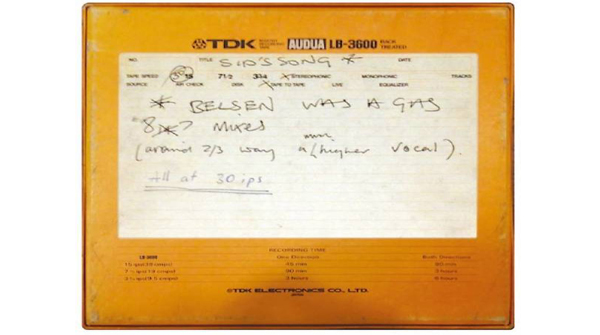 The Sex Pistols will be celebrating the 35thanniversary of seminal punk album 'Never Mind the Bollox,Here's The Sex Pistols' with a super deluxe box-setscheduled for a Sept.24th release date.

The box-set will include audio of original master tapes, exclusivefootage, rare interviews, band pictures and punk artefacts from theband's explosively short lived career. And with the release datelooming the band have now made a studio version of theircontroversial live track 'Belsen Was A Gas' available tostream in order to promote their upcoming anniversary.

The track was written by Sid Vicious before hejoined the band and featured heavily in their stage set towards theend of the career. Prior to the newly recovered demo only liveversions, plus a studio take with Ronnie Biggs, have beenavailable.

'Belsen Was A Gas' was written about Nazi Concentrationin Bergen-Belsen that was liberated by British troops in 1945 and,in true Pistols fashion, was designed to with the intention toprovoke.

The demo was recorded at the Pistols infamous Denmark Streetrehearsal room by their soundman John 'Boogie' Tiberi on a TEACfour-track.

"John decided to work on 'Belsen' with Sid, rearranging thelyrics while Steve and Paul worked on the track and I wired upDenmark Street to put it down to a 4-track," remembers John Tiberi."It really shouldn't have to be said but that's Sid on bass. It wasvery clumsy, no monitors, sound insulation was non-existent. Ithink they all enjoyed doing it outside of the Wessex environment,which had by then become quite oppressive. When I played it to(Pistols producer) Chris Thomas he probably thought I was barmy andcouldn't understand the reverb vocal, but that's the way Johnwanted it. I thought it was good as a kind of sketchidea."

Producers of the box set say:

"The controversial subject matter and dark humour of the songwas designed to upset and provok,  and is certainly aninteresting footnote to the Sex Pistols' finite catalogue ofsongs."

Pre order your copy of one of the most influential albums inBritish music history,  here.