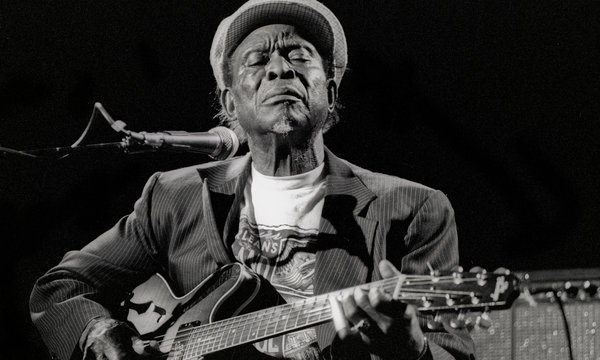 David "Honeyboy" Edwards was a Delta blues guitarist and singerfrom the American South. He was also the last of the original Deltabluesmen and now a documentary that looks at the history ofthe blues through his eyes will soon be released on DVD. Watch thetrailer below.

'Honeyboy and the History of the Blues' looks at the career ofthe bluesman, who passed away in Chicago on August 29, 2011 at theage of 96.

The film features interviews with Keith Richards, Joe Perry,Robert Cray, B.B. King and Lucinda Williams talking about theimportance of the blues, both on their own work and the history ofAmerican popular music. Edwards is also seen performing, in clubs,in a rural setting, and along the Chicago lakefront.

Called "The Last of the Great Mississippi Delta Bluesmen,"Edwards friends included greats, such as Robert Johnson and CharliePatton. He appeared in the 1991 film, 'The Search for RobertJohnson,' and over the years frequently told the story of how hewas present the night in 1938 when Johnson was fatally poisoned bya jealous husband.

On Saturday, somebody like me or Robert Johnson would go intoone of these little towns, play for nickels and dimes. Andsometimes, you know, you could be playin' and have such a big crowdthat it would block the whole street. Then the police would comearound, and then I'd go to another town and where I could play at.But most of the time, they would let you play. Then sometimes theman who owned a country store would give us something like a coupleof dollars to play on a Saturday afternoon. We could hitchhike,transfer from truck to truck, or if we couldn't catch one of them,we'd go to the train yard, 'cause the railroad was all through thatpart of the country then...we might hop a freight, go to St. Louisor Chicago. Or we might hear about where a job was paying off - ahighway crew, a railroad job, a levee camp there along the river,or some place in the country where a lot of people were workin' ona farm. You could go there and play and everybody would hand yousome money. I didn't have a special place then. Anywhere was home.Where I do good, I stay. When it gets bad and dull, I'm gone.

Edwards moved to Chicago in the 1950s and continued to performand record up until only a few months before his passing. Edwardswon a Grammy Award in 2008 for Best Traditional Blues Album, and in2010 was awarded a Lifetime Achievement Grammy. His autobiography,'The World Don't Owe Me Nothing,' was published in1997. Edwards continued the rambling life he describes in hisautobiography as he still toured the world well into his 90s.