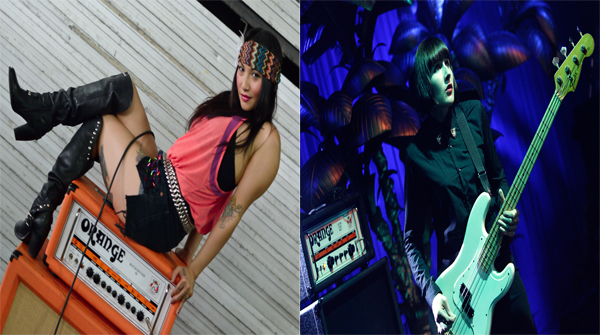 OrangeAmplification's world class roster of artists continues toattract the best talent in the business and Orangeare proud to announce a number of new artists from around the worldjoining their roster.

Paloma Faith's bassist,Andrea Goldsworthy will now be playingbass with her Orange Amp when she hits the road on theup-and-coming Fall To Grace tour. BrittanyHoward, front woman for the southern rockers,Alabama Shakes has been using her Orange Amps tohelp take the band from virtual unknowns to festival headliners inless than a year.

Both guitarists, Chuck Ragan andChris Wollard and bass playerJason Black of the American post hardcore/ punk rock band, Hot Water Music, have all becomeOrange endorsees. You can hear their Orange tinted sound on theirnew album Exister, the first since they reunited back in 2007.AWOLNation, the break out band of 2011 with a hitalbum and two billboard charting singles will all be using OrangeAmplification on their 2012 European tour which includes the firstUK date in thirteen years!