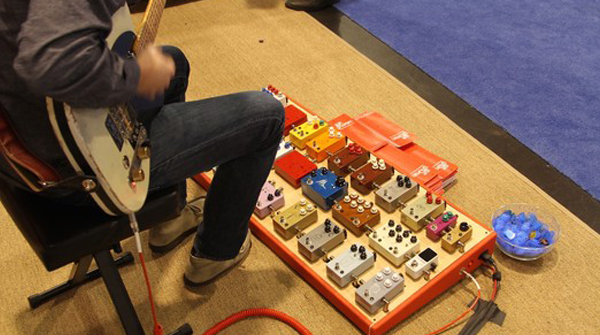 (PRESS RELEASE): Demand for customized, unique sound is driving fretted products and effects sales to a seven-year high, while fueling a new wave of boutique pedal builders. Over the last decade, the retail value of the effects pedal category has increased more than 45%, with a 13.7% gain in 2014.

The emergence of hundreds of up-and-coming pedal brands can be traced to new technology and easier global distribution, of both ideas and components. Robert Keeley, founder of Keeley Electronics, Inc., has seen his Edmond, OK business double since 2012. It is now producing more than 2,000 units per month. “Our products are almost completely hand-built and we cater to a group of people who are in the market for specialty-purpose pedals,” said Keeley. Big- name players including John Mayer, Jimmy Buffet and Dream Theater’s John Petrucci are among those who have called on Keeley for customized pedals, with some of those pedals crossing over into a limited-edition commercial run.

Joel Korte, founder of Minnesota-based Chase Bliss Audio has seen sales double in the last year and adds, “Musicians like to experiment with sound using pedals because the experience is very visceral and pedals are hands-on and offer the artist control right away.”

Affordability has also emerged as a major factor in the surge as artists add distortion, phasers and vibrato to their signature sound. The cottage industry of boutique pedal makers offers ways to tweak and discover sounds for an average price of $100-$400 dollars.

Many of these emerging builders, including Akron, Ohio’s family-owned EarthQuaker Devices, have also focused on demonstrating their products for non-traditional pedal players, such as sax, synth and violin players. Julie Robbins of EarthQuaker Devices emphasizes that innovative, specialty-designed sound is a key factor in the company’s success. “We answer the call of experimental musicians who love to create sounds that inspire them to go in new directions,” said Robbins. “Some just want to recreate classic tones, while others use their pedals as a way to actually define their newest album, and we cater to both.”

Demand is also up for pedals that couple long-lasting new technology with “old school” parts to create coveted “vintage” analog sounds. Pete Celi, co-founder of growing Southern California builder Strymon, says interest in vintage pedals has skyrocketed, including tape delays, vintage amp tremolos, pedals from the 70s, but he notes these originals can be unreliable on tour and prices make those purchases beyond the reach of most musicians. “This creates an opportunity for pedals that can capture those sought-after sounds and yet be conveniently and reliably used at gigs,” said Celi.

Strymon employs a one-on-one strategy with musicians, regularly holding open-studio parties. Celi says the conversations are paying off. “We believe everybody is an artist.”

Plan now to join the global music instrument and product industry January 21-24, 2016 at the NAMM Show in Anaheim, CA. NAMM members are encouraged to register for badges by January 6, 2016, at which point badge registrations will incur a $50 to $100 fee depending on the badge type.