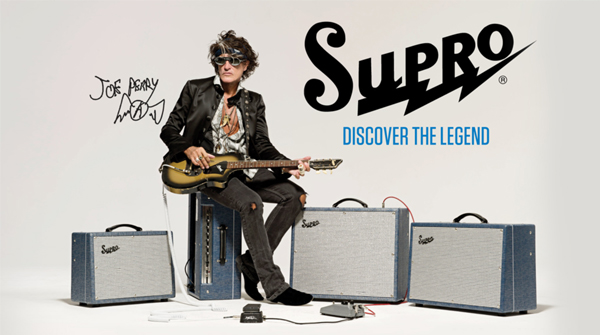 (PRESS RELEASE): From its earliest roots in the Chicago Blues scene, to the touring amp of Jimi Hendrix with Little Richard and the Isley Brothers and of course being ‘that’ tone on the earliest Led Zeppelin recordings, the new Supro website provides everything you need to know about these critically acclaimed reissued amps.

Visitors can check out every aspect of their construction, from the the preamp and power amp specs, the custom designed loudspeakers and of course the authentic valve-driven tremolo and reverb circuitry.

Reborn in 2013 when Absara Audio bought the rights to the Supro brand name from acclaimed amp designer Bruce Zinky, the team collaborated with him to faithfully recreate the classic Blue Rhino Hide models of the 1960’s. This new breed of Supro amps have been such a success that artists such as Brian Setzer, Paul Simon, Joe Walsh and Aerosmith’s Joe Perry (who graces the new website’s home page) have been happy to lend their names to the ever-growing roster of Supro devotees.

Chock full of information that covers all ten models in the new Supro line-up including in-depth videos from guitarists such as Steve Stevens, John Verity and Snarky Puppy’s Michael League, users can find their nearest Supro stockist with the comprehensive on-line worldwide dealer locator and access full ‘concierge-level’ customer support.

Visitors to this year's NAMM Show can check out the full gamut of Supro Amplification first hand at Booth 5218 Hall B.