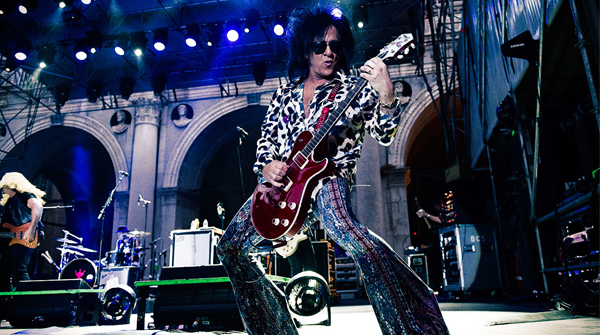 (PRESS RELEASE): Grammy-Award winning Virtuoso and long time collaborator Steve Stevens and Knaggs Guitars proudly announce the Steve Stevens SSC. Based on their successful Signature models SS1 & SS2, the SSC is a more classic approach for serious players who are interested in this particular shape, feel and sound yet are looking for a less flashy and more Vintage oriented instrument.

Steve Stevens said: “After pushing the envelope of opulence and high bling factor, we felt if we were going to introduce another guitar in the Knaggs SS series where do we go? Well….back to the roots was the obvious answer.  As Knaggs guitars are so known for their stunning highly figured tops, let’s do a guitar that showcases that aspect and adds a warm old school factor”.

Joe Knaggs added: “It has been great working with Steve throughout the past years. We are happy and excited to continue our collaboration with one of the most influential players out there”.

The SSC will be unveiled at the NAMM show 2016 in Anaheim, Cal.  Steve will be present to answer questions and see his fans at booth #1797 (day and time TBD, please check updates on social media).

Joe Knaggs and a small dedicated team of skilled guitar makers have been carving a niche for themselves in the World of high-end American made guitars in just a few short years. The company recently celebrated its 5th Anniversary.