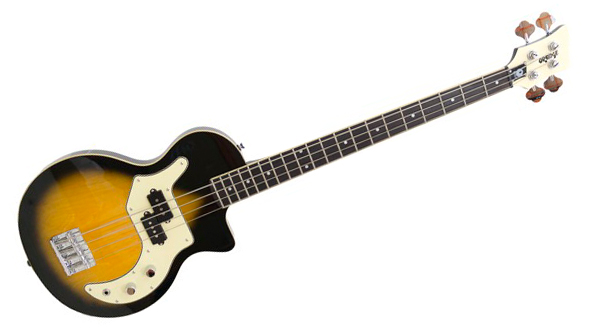 (PRESS RELEASE): Orange Amplification unleashes the O Bass, the latest brainchild of Ade Emsley, Technical Director and Lead Designer. It first made an appearance at the 2014 Winter NAMM as a demonstrator piece, hidden from view backstage. However Orange has been inundated with production requests following a number of leaked internet videos.

With its impeccable smooth lines and shapely aesthetics, the O Bass has a distinctive sonic mojo – a well-balanced bass response with a warm strident mid-range. Players with a softer touch will immediately love the abundant ‘Motown-esque’ earthy overtones. Dig in a little more aggressively and the O Bass will respond with infectious harmonic raunchiness, ‘growling like a policeman’s dog’ as Ade put it!

Available in three colours, Teardrop Sunburst, Off-Black and Orange, the O Bass comes with a maple neck, rosewood fingerboard and custom-wound split coil pickup. It is supplied with a second 3-ply pickguard for customisation and fitted with master volume and tone controls, a top loading 4-saddle bridge, 2-a-side open gear tuners and knurled knobs. It comes complete with a padded Orange gig bag.

The O Bass is set to be an instant classic with bassists pursuing a genuinely authentic retro sound. Check it out, with other new products at the Orange Amplification Booth# 4890, Hall C.

In response to the array of Class D bass amp offerings from other manufacturers, Orange Amplification has broken the mould in order to create the consummate tool for the demanding contemporary bassist. The new all analogue 4 Stroke 300 & 500 heads feature everything you need and nothing you don’t, delivering audiophile levels performance in a 2U rackmountable format.

With Class A/B output and a new discrete Class A input buffer stage, these amps speak with supreme authority and clarity, pumping out powerful, full-bodied tones that remain composed and expressive across the sonic spectrum.

The centrepiece of the 4 Stroke Series is the extensive 4-band parametric EQ network, offering players unparalleled control over their tone. This uncompromising approach allows players to sculpt their signature sound in any environment, without the fussiness that plagues so many. The finely tuned Q curves of the frequency dials achieve the perfect balance between precision and usability, whilst each band can be controlled with up to 18dB of cut and boost. Typically Orange – they do much more with much less!

The 4 Stroke’s footswitchable on-board compression tracks seamlessly and maintains the dynamics of the performer for a fat, articulate sound with tonnes of depth. Available in either 300 or 500 Watt variants, both include the usual essentials like line-level and balanced outputs, plus a pair of parallel speaker outputs. Its Class A/B nature also means it can also be run without a speaker load, making it perfect for direct recording.