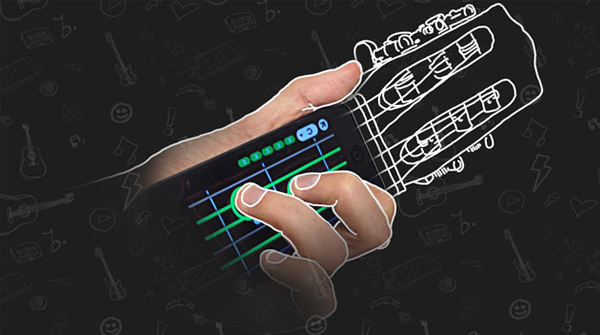 Musopia’s series of music apps, starting with FourChords Guitar Karaoke (free on iOS), are designed specifically to help everyone learn to play guitar easily and quickly and to inspire the Guitar Gods of tomorrow!

ChordShaker Pocket Guitar pushes the boundaries of the iPhone by using five simultaneous touch points on the screen allowing the player to hold it just like a real guitar neck to play the chords.

ChordShaker enables enthusiastic beginners to learn guitar chords on the move so you can practice anytime, anywhere. From learning initial chord finger positions to playing from the in-app song selections, players develop muscle memory for their fingers and then transfer their new skills to a real guitar.

Once players have learned the basics, ChordShaker then becomes a virtual guitar with its ‘jamming’ function helping fast track those guitar solos to perfection.

“Tools like this can make the world of difference to learning an instrument. With over 80% of beginner guitarists quitting within the first 6 months, we are using mobile technology to make music making more accessible. We designed ChordShaker to make learning guitar fun, rewarding and intuitive, and most importantly, to keep players playing - ChordShaker is the guitar teacher in your pocket.”

ChordShaker has been designed as the first stage in Musopia’s guitar app series, where beginners learn the chords, then progress up to the next stage with the FourChords Guitar Karaoke where they learn to play over 500 hit songs with easy chords and lyrics.

ChordShaker App - Learn to Play Real Guitar with your iPhone