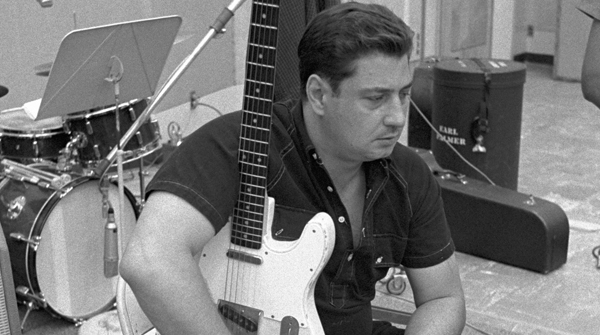 (PRESS RELEASE): Musicians Institute, the College of Contemporary Music, is proud to announce the theatrical release of documentary film The Wrecking Crew on Friday, March 13, 2015.

Featuring MI’s very own founding father Howard Roberts and his right-hand man Tommy Tedesco (pictured), the film tells the story of “first call” session players who recorded with everyone from The Beach Boys to Frank Sinatra. They played on hundreds of songs that ruled the charts in the ‘60s and ‘70s, ultimately leading to a Musicians Hall of Fame induction for the entire Wrecking Crew.

In 1977, Roberts and businessman Pat Hicks founded the Guitar Institute of Technology (GIT), which later added programs for other instruments and evolved into Musicians Institute. As Roberts’ supporter and close friend, Tedesco served as a visiting faculty member, holding numerous student seminars on the art of being a studio musician. The pair recruited some of the top player-educators in the U.S. and established a tradition that continues at Musicians Institute today: instructing students with a unique blend of creative, educational and professional talent.

“Howard and Tommy were A-list musicians who endowed the school with an authentic real-world foundation that no other school is able to capture,” said Beth Marlis, Vice President of Industry & Community Relations at MI. “Their modern approach to technology profoundly changed the landscape for contemporary music education, by utilizing the speed learning and visualization skills they honed during their decades in the recording studio. These techniques remain a part of MI’s DNA even to this day. Without their vision, passion and expertise we would not have the over 30,000 successful MI alumni in our midst today.”

In 1996, Tedesco—known as “Tommy” throughout campus—was diagnosed with cancer. This motivated his son, producer/director Denny Tedesco, to begin production of a movie documenting his father, as well as Roberts and other members of The Wrecking Crew. After 19 years in the making, a huge fundraising effort, and numerous film festival awards, Denny Tedesco is now finally able to publically share the documentary as a son’s love letter to his father.

“I never thought it would take this long,” explained Denny Tedesco, “But my father taught me to never give up. As the musicians would say to me, they were so lucky to be at the right place at the right time. And I know Musicians Institute was the right place for my dad and the other members of The Wrecking Crew to contribute their experience and expertise, inspiring students who wanted to be like them. That’s why I started documenting the MI seminars and making sure they were a focal point in the film.”

Most of the donations that were made over the years after Tedesco had made the film, helped pay for the $500,000 in master and publishing licensing.  In order to pay for the musicians union (so musicians would be paid) they turned to Kickstarter to help raise the $250,000 needed.  They surpassed their goal and raised $312,000.  The Wrecking Crew became the third top documentary funded through Kickstarter.

The story of the MI legends Roberts and Tedesco will live on forever through the film, which also features historical footage of the school in its early stages.

For more information on the film, please visit The Wrecking Crew’s website.