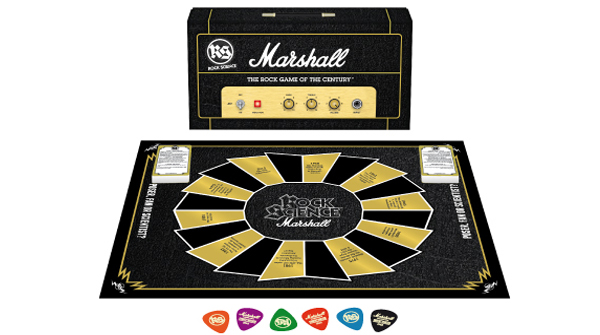 One of the world's most iconic brands of musical equipment,Marshall Amplification, joins up with the rock game of the century,Rock Science to celebrate '50 Years of Loud' with a limited editionversion of the wildly popular Rock Science board game. With over1,600 trivia questions ranging from early rock and metal to currentartists, the Rock Science Marshall Game is a tribute to the immensecontribution Marshall Amplification has made to music history.

"For a guitar aficionado this is a dream come true. 50 yearsof rock guitar history in one game." says Rock ScienceCreative Director, Jorge Bravo.

Rock Science is a board game for 2-6 players. The goal is to bethe first to finish one lap around the board through the use ofrock knowledge, clever betting and a bit of luck. Players answerquestions about anecdotes, myths, rockers, albums, songs and Sex,Amps & Rock 'n' Roll. You can also be asked to hum the riffs ofwell-known rock songs.

All questions have three levels of difficulty: Poser, Fan andScientist. Poser questions are easier so anyone can join thegame!

All players are always involved since they bet on each other'srock knowledge.