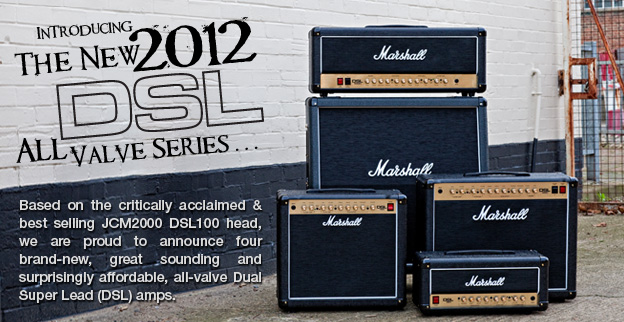 The new DSL 100H still retains the original amp's mainfeatures and valve structure, but with an added Resonance control,digital reverb instead of spring, and a rear panel Pentode/Triodeswitch which drops the output down to 50 watts from100.

The new models are:

This all-tube twin-channel 100 Watt monster takes everythingthat was great about the DSL100 and adds modern upgrades to theoriginal valve circuitry. It comes fitted with 4 x ECC83 and 4 xEL34 tubes, the same set of tubes that the original DSL100 had.Marshall stopped at copying the eq controls like for like and addedthe resonance control which allows you to shape the low-end. Theold spring Reverb in the original version is replaced with a moresturdy and consistent studio-quality digital reverb. And finally,like its little brother, the DSL1100H comes with a Pentode/Triodeswitch which cuts the amps output to 50 Watts.

Marshall has described the DSL15H as a mini-brute. Still withthe same all-valve design, 4 12AX7's and 2 6v6's tubes power thislittle monster. It comes with two footswitchable channels - classic"British" gain and ultra gain and also features very good toneshaping options for a head this size. With a 4 way EQ, a midshiftbutton and a deep button which boosts the low register, the DSL15Hlooks a real gem. It retais at $499.99, and also includes thefootswitch in the price.

The Marshall DSL15C is the combo version of the DSL15H, itfeatures the same all-tube amplifier conveniently paired with a 12"custom voiced Celestion speaker. This 1x12 combo gives you the sametube circuitry and tone shaping features as the amp head version -including the 4 way EQ, midshift and deep buttons. Not only that,Marshall equipped the DSL15C with a footswitchable digitalreverb.

The DSL40C 40 Watt Combo has 4 12 AX7′s and 2 EL34′s andalso has 2 channels, classic gain and ultra gain with 2 modes perchannel. The digital reverb has a level control for each channeland again this amp has the Mid-Shift and Deep controls andPentode/Triode switch to go between 40 and 20 Watts. It also has abypassable Series FX Loop and a single 12″ CelestionSpeaker.