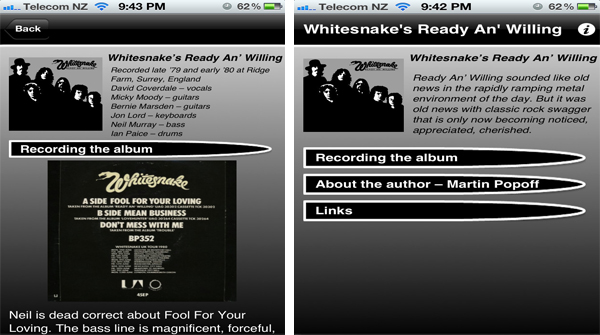 A 16 page eBook detailing the making ofWhitesnake's 1980 album 'Ready An'Willing' is now available for a bargain 69 pence (orone US $).

At the time the album was being made Whitesnakefeatured ex-Deep Purple members DavidCoverdale, Ian Paice &the late Jon Lord. When released thecritically acclaimed record peaked at #6 on the UK album chart andmarked the first time the blues-rock outfit charted outside of theUK reaching #32 in Norway and #90 in the US.

"I've had all the interview footage for this one in thePopoff archive for a long time so I'm glad to finally see itlaunched in our new buck-a-shot digital format.

"Talked to bassist Neil Murray, guitarist Bernie Marsden andvocalist David Coverdale about this album, sort of a bit everychance I could get over the years, because it's my favouriteWhitesnake album, one of the finest Martin Birch recordings toboot, and issued during the excitement of the NWOBHM and yetbluesily above the fray."

'Ye Olde Metal: Whitesnake's 'Ready An' Willing' is available as a16-page eBook in high-resolution PDF format from www.zunior.com and as an app foriPad, iPhone and iPod touch in the iTunes App store.