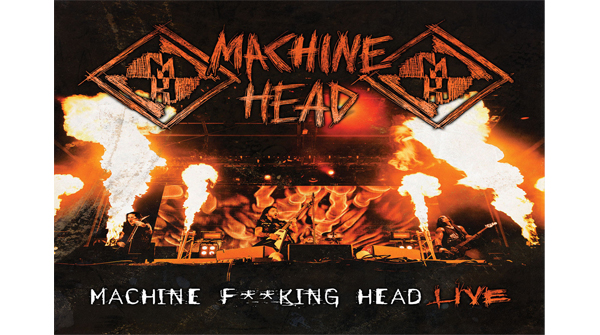 Machine Head are arguably one of the best livebands in the hard rock and metal world and have been mesmerisingaudiences for the last two decades with their hard hitting brand ofthrash inspired groove metal.

The new live album will be the second live effort from thecurrent line up of Robb Flynn, Adam Duce,Dave McClain and Phil Demmel. Their previous liveoffering, 'Hellalive' was released in2003. However, in the past nine years Machine Headhave released three albums - 'Through the Ashes ofEmpires' (03), 'TheBlackening' (07) & 'Unto theLocust' (11) -  and are undoubtedly, at present,the peak of their prowess.

'Machine Fucking Head Live' was recordedat various tour stops around the globe last year whilst the bandtoured new album 'Unto the Locust'. Itincludes a slew of classic tracks from the band's expansivecatalogue, including 'Imperium', 'Aesthetics ofHate', 'Locust', 'Ten Ton Hammer', 'Thisis the End' and 'Halo.'

"The Head Cases [Machine Head's nickname for their fans]have been so intense on this tour cycle that we had to startcapturing the shows, especially with technology making it so mucheasier to record," said frontman Robb Flynn. "Weculled some of the best nights where the band and crowd were onfire and made a badass, nearly two-hour, double live album, whichis a great documentation of where the band is at, 18 yearsdeep."