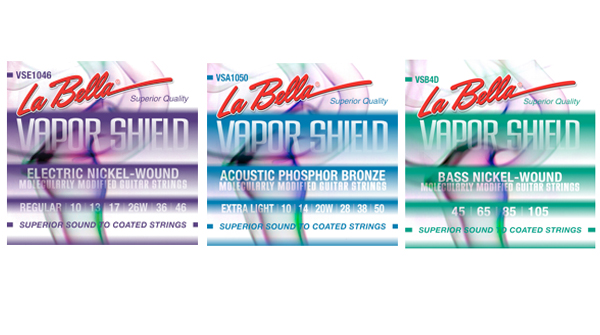 (PRESS RELEASE): La Bella Strings is taking a new approach to extended-life strings, adopting a technology superior to typical coated strings. La Bella Vapor Shield™ strings are like no other string on the market because the surface of the string is modified during the treatment process.

Using a highly sophisticated Ionic Vapor Process™ developed by Acoustic Science™, proprietary compounds are activated in a glow discharge electromagnetic plasma, modifying the string’s entire surface. The result is a string protected from grime, tarnishing, and oil residue. Most importantly, string playability and life is extended without flaking or compromising tone.

Unlike typical coated strings, the entire surface and full length of all Vapor Shield™ strings are treated with a nucleated polymer vapor – no spraying or dipping.

The results are unrivaled: