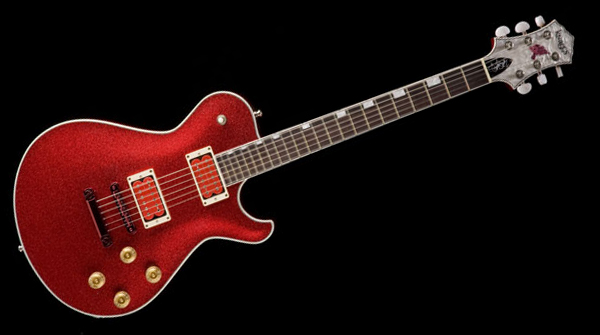 A new limited edition guitar designed and built to the specifications of Billy Idol collaborator Steve Stevens is set to be released by Knaggs Guitars. The new signature models will be limited to a run of 100 instruments available in Red Sparkle, Cream and Black.

Limited to only 100 instruments in three colors (Red Sparkle, Cream and Black) the SS2 features a Mahogany body with carved Maple top, custom SS neck carve, Rosewood finger board with Mother-of-Pearl inlays, Ray gun head stock inlay and Signature Bare Knuckle pickups with engraved Ray guns not available in any other guitar. Each instrument comes with an exclusive Certificate outlining specs and serial-number (1-100) and will be hand signed by Steve and team Knaggs. A black form fit case completes this limited run offering.

Steve Stevens said: “I believe there is a soul and energy to a guitar well beyond the materials used. There is musical karma. My over 30 year friendship with Peter Wolf laid the basis of building the guitar of my dreams. I then put that dream into the hands of Joe Knaggs, who I feel is the absolute best guitar builder/designer out there today. The fact that my guitar is available to the public is extremely cool, but honestly I’d play this instrument no matter whose name was on it. It truly is magic”.

Joe Knaggs added: ”It is always an honor and inspiration to be working with Steve and I’m proud of what we have created together”.

Sales of Steve Stevens’ Signature models will help MusiCares, a charity Steve has been supporting. "We wanted to give back some of the proceeds of my Signature guitar and MusiCares immediately came to mind. I’ve personally seen them help so many gifted players change their lives for the better. They are such an amazing organization”.