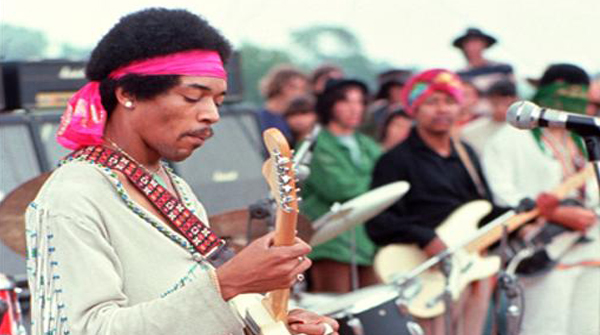 The guitar icon's legendary set will be screened on 29th Novemberand the 4th December at over 30 cinemas across the UK and intheatres worldwide.

"This film reflects a legendary event in our history as wellas a true pinnacle of Jimi's career. We celebrate his 70th birthdayas we continue to celebrate his legacy".

The show is being released to celebrate the 70th year of Hendrix'sbirth and will play alongside the film Live at Woodstock.

Hendrix early morning performance at the 1969 Woodstock festivalsaw Jimi play for over 200,000 people. Jimi finally took to thestage at 9.00 AM after many delays caused by whether issues alongwith the Gypsy Suns and Rainbows, which featuredbassist Billy Cox and guitarist LarryLee.

The set is most renowned for Hendrix's 'Star SpangledBanner' medley which lasted for over half an hour. The medleyincluded hits like 'Voodoo Child' and 'PurpleHaze' and an unaccompanied an improvisation lasting nearlyfive minutes. Hendrix performed the national anthem as a solo inthis midst of the medley.

The footage has been digitally restored and features a new 5.1audio surround mix by Kramer. The footage will show the songsperformed in original sequence, shown below.