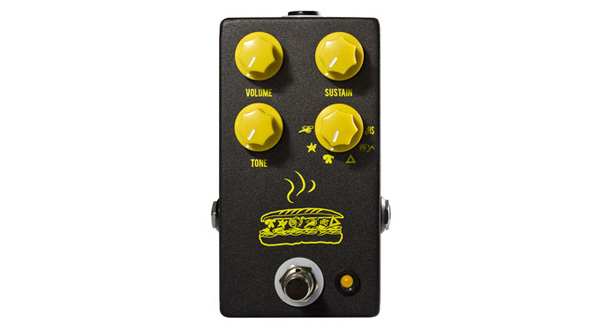 (PRESS RELEASE): JHS Pedals has launched the new Muffuletta fuzz pedal, a tribute to the legend and story of one of the greatest pedals ever invented.

The Muffuletta replicates five classic Big Muff circuits from years gone by as well as a new and original JHS version for a total of six Muff models. All executed without any digital signal processing or digital emulation. When you choose a model, you are achieving analog tone that uses real components and values found in the original units. We have selected our favorite classic versions from the pages of history and made them available in one small format pedal that is easy to understand, operate and do what it should do… replicate rare, expensive, mythical and sought after versions of this circuit with ease.

The pedal features four controls: Volume, Tone, Sustain and Mode. The “Volume" control works just like any other volume control allowing you to adjust the overall output of the pedal to your taste. The “Tone” control lets you brighten or darken your overall tone. The “Sustain” control is best understood as a gain or distortion control as it gives more distortion to the circuit. The “Mode” control lets you choose from our six different versions of the Big Muff on the fly. Looking at the “Mode” control you will see six icons around the lower 50% of the knob. Here’s a quick description of the six modes:

"I want to give a massive thank you to my good friend Jon Cusack and Cusack Music for helping this hefty idea be fully realized. Jon you are a wizard of circuitry and a deep well of design knowledge to the things that are over my head,” says JHS Pedals’ Josh Scott.