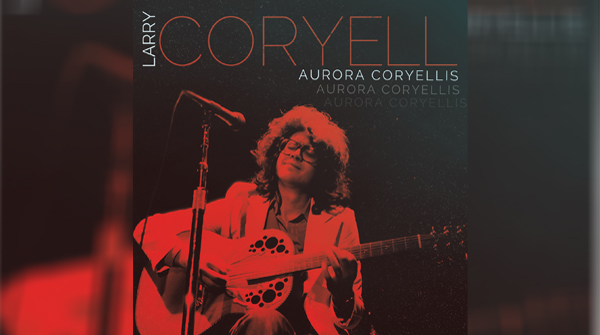 (PRESS RELEASE): One of the most respected and celebrated jazz fusion guitarists of his generation, Larry Coryell presents a brand new triple disc box set of unreleased live performances. Titled Aurora Coryellis, this captivating collection highlights Coryell’s prodigious talents in a multitude of settings, from a full band performance in 1972 at the Jazz Wokshop in Boston to a solo acoustic show in 1976 at Clark University (Worchester, MA) plus a more recent appearance in 2002 at the San Jose Jazz Fest with his talented trio featuring award winning drummer Paul Wertico and bassist Jeff Chambers! Each of these performances come on separate CDs in their own sleeves housed in a deluxe box with a lavish, full color booklet featuring extensive liner notes based on a new interview with Mr. Coryell himself. The box will be released July 24 from Purple Pyramid Records.

Reflecting on this collection, Coryell states, “I have fond memories of the high integrity of the students in Worcester, MA; it was always a special place. Of course, The Jazz Workshop Boston was kind of a ‘home base’ from where we developed our music in the ‘70s, when we were trying to create something that respected the basics of jazz but was still a new form of music. Club manager, Freddie Taylor, was our number one booster as we ventured into uncharted territory. And what can I say about beautiful San Jose! A great city with great people and an absolutely beautiful outdoor park in the center of town. Playing with Jeff Chambers and Paul Wertico was an exhilarating journey into the essence of jazz!”

Born in Texas, Larry Coryell began his ascent to the upper echelons of jazz virtuosos in the mid ‘60s when he joined the quintet of famed drummer Chico Hamilton in New York. That gig led to several other stints as a sideman for Gary Burton, Herbie Mann, and Randy Brecker among others. In 1968, he released his debut album Lady Coryell at the young age of 25, which then lead to subsequent solo album and the formation of his own group The Eleventh House. Through these releases, Coryell earned international acclaim for his daring compositions and interpretations as well as his inspired improvisations. He continues to perform shows and release new albums regularly. For those unfamiliar with this living legend, Aurora Coryellis is the perfect place to start.