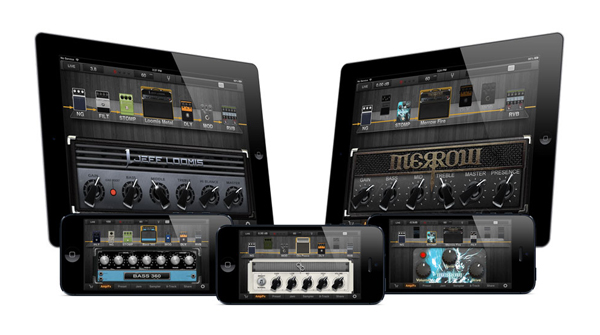 Positive Grid, the developers of JamUp Pro XT for iOS, has announced a major update to its rockin’ Guitar/Bass iPad and iPhone Amp-Effect Processor.

“I’m really excited about the signature amp models they’ve made for me,” Merrow boasts. “When I travel, I always bring my guitar and my iPad loaded with JamUp. You never know when inspiration may strike! They sound crushing! With their addition, the JamUp app just keeps getting better and better!”

“The addition of the Ola ‘War & Peace’ amps on the new JamUp Pro XT 2.4 are closest to the real deal and definitely the only amp sounds you’ll ever need!” adds Englund. “With complete control over the style of gain on the ‘War’ amp, you have the most versatile amp sounds out there, and the ‘Peace’ amp is what I would define as the cleanest of the clean amps. Together, these are a deadly combo on the battlefield!”

“The array of amps and pedal sounds that I use both live and in the studio now available in this app will definitely suit the metal musician or any guitar player who is looking for a quick guitar sound to dial in, be it on the road or in the studio,” says Loomis. “The tones are killer!”

In addition to the signature pack offerings, JamUp 2.4 also packs a host of extra onboard bells & whistles, adding new tackle to your mobile toolbox. Plus, the new update now offers the world’s the first and only in-app ToneSharing platform, allowing you to explore, share and download over 5,000 artists and users presets with our growing JamUp community. Here are a few of its standout features:

• ToneSharing: JamUp offers the world’s the first and only in-app ToneSharing platform. The brand new re-designed interface allows you to browse thousand of presets by simply looking at their effects chains and amp settings. With the power of our fast-growing JamUp tone community, now you can explore, like, comment, share and download over 5,000 artists and users presets.

• Pitch Shifter: JamUp adds a real-time pitch shifter and harmony effect, simply controlled by your expression pedal. Using any StompBox or MIDI footswtich, you can turn your JamUp into a real whammy pedal.

• Increased Preset Slots: Store up to 128 presets for all your favorite sounds at the touch of a button!

JamUp Pro XT retails for $19.99 and is available for download at the iTunes App Store. Metal Signature Pack ($9.99) and Bass Expansion Pack II ($9.99) are available as in-app purcha