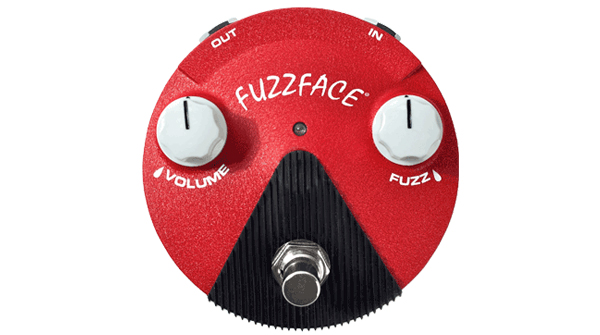 (PRESS RELEASE): Over the course of ’69–’70, Jimi Hendrix appeared at his most noted live appearances — Live at Woodstock, Live at Berkeley, and Live at the Fillmore East — using a mysterious red Fuzz Face Distortion with white knobs. That fuzz box sounded like a completely different animal from any of the other Fuzz Face pedals in Jimi’s arsenal, snarling with a far more aggressive, biting tone.

The pedal itself has been lost to history, but its unmistakably unique tone lives on in the recordings of those three iconic shows, and Hendrix aficionados have tried to cop that sound for years.

We are happy to say that their tonal quest can finally come to a glorious end.

Poring tirelessly over all of the different customized circuit designs Jimi used over the years, our engineers narrowed down this elusive fuzz tone to a version of the Octavio Fuzz without the octave up circuitry. After making a few tweaks, they nailed it with the FFM6 Band of Gypsys Fuzz Face Mini Distortion.

Now, you can get the same Fuzz Face tone Jimi used to woo the masses at his most famous performances, in a pedalboard-friendly Fuzz Face Mini housing with an AC power jack and an on/off status LED. Like all Fuzz Face pedals, the FFM6 features true bypass switching.

The Band of Gypsys Fuzz Face Mini Distortion available at limited international retailers, and exclusively in the US at Guitar Center and Musicians Friend.