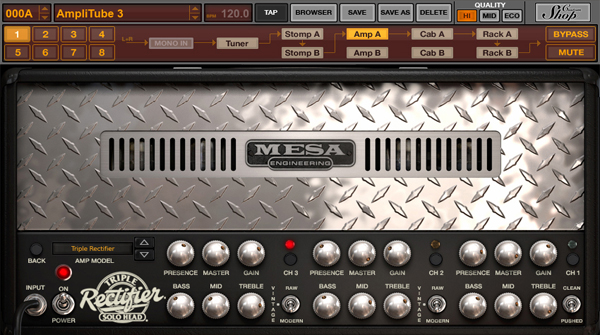 IK Multimedia is proud to announce AmpliTube® MESA/Boogie®, a new collaboration with the R&D Team at Mesa Engineering that brings some of the most legendary tones from the original boutique manufacturer's amplifiers and cabinets to AmpliTube® 3 Custom Shop for Mac and PC.

Now guitarists, producers, engineers and anyone needing the power of "in-the-box" professional amplifier software can enjoy modelled versions of several of MESA/Boogie's most famous high-gain sounds via 5 inspiring amplifiers and cabinets. These exciting new co-developed models deliver everything from gorgeous sparkling clean sounds to the percussive aggression and tight crunch of the Rectifier series to the violin-like sustain of the Mark series to the ultra-flexible mid-gain British leanings of the TransAtlantic TA-30, and everything in between.

This first-ever officially authorised by MESA® line-up includes the classic Boogie® V-Curve EQ'd crunch rhythm and singing lead voice of both the MARK III and MARK IV Series as well as what many refer to as the biggest sound in Rock, the crushing gain of the Dual and Triple Rectifiers - these are amps that have ruled the airwaves for almost two decades. As an added bonus, the TransAtlantic TA-30 (MESA's upscale tribute to the classic British EL84 legacy) is included as well. It roams the elusive pushed clean and medium gain territories with both finesse and attitude.

And, like all AmpliTube virtual gear, these models have been meticulously crafted to sound, look and perform just like their hardware counterparts. Each model has been meticulously scrutinised, worked, re-worked and approved by the R&D Team at Mesa Engineering. The addition of these inspiring MESA/Boogie amp models to AmpliTube Custom Shop means the world's biggest library of officially authorised virtual guitar gear just got infinitely more versatile, and certainly more toneful.

High-gain boogie on the desktop/laptop

Nothing says high-gain modern guitar tone like MESA/Boogie. MESA literally invented the concept when the original boutique amp company burst on the scene in the late '60s with the now legendary MARK I Boogie®. Its innovative "cascading" tube preamp introduced guitarists to a new, never-before-possible world of sustain that was, at long last, separate from volume.

Leap-frogging all existing guitar technologies of the day, that original tone was a defining part of the sound of golden-era greats like Carlos Santana, Pete Townshend, Keith Richards, Robben Ford, Larry Carlton, The Eagles, Fleetwood Mac, The Grateful Dead and countless other recording artists throughout the 70s. And that original tone has also helped to set the stage for successive waves of era-defining high-gain tones over the years thanks to amps like the MESA/Boogie MARK II, III and IV and the inimitable Rectifier Series, which again completely re-defined MESA's impact on the world of Rock. When the percussive, yet perfectly-scooped high-gain aggression of the Recto's was unleashed on the radio via the music of Limp Bizkit, Korn, Linkin' Park, Creed and other 90s greats, there was no turning back. Guitar forever more HAD to be menacing. Today the Recto's continue to widen their footprint in defining Rock and Metal, and, after 21 years, they're still in constant demand and uninterrupted production.

AmpliTube MESA/Boogie recreates this historic and diverse legacy in virtual form. IK software engineers worked relentlessly with the Mesa Engineering R&D Team to ensure that each amplifier and cabinet has been rendered with the same degree of integrity and attention-to-detail that goes into the company's physical products - the operation of both the front and the back panel controls has been fully replicated to provide exacting performance and function. The amplifiers and cabinets available in AmpliTube MESA/Boogie include:

MESA/Boogie Dual and Triple Rectifier: THE standard for modern high-gain heavy guitar tone and more. The Rectifier amps are aggressive amplifiers for aggressive players. They're some of the most recorded and widely visible amps on big-venue stages all across the world. Effectively two different power section versions of the same amp introduced in 1989, these amps deliver maximum tone flexibility and serious rock attitude. Both have played a major role in defining the sound of grunge, metal and countless other forms of hard and heavy music. Each amp offers 3-channel, 8-mode operation and varying levels of tube saturation, plus a virtual switchable tube/solid state rectifier section. Soul, personality and feel: the Rectifiers provide a tremendous range of sounds that can be everything from crushingly percussive to liquid and elastic. These amps provide a high-gain response that can't be found anywhere else.

MESA/Boogie Mark III: This amp from 1984 is the first original 3-channel "Tri-Modal Amplifier" design. It features an amazing set of sonic sculpting tools; it sports the original three-channel setup: Rhythm, a distinct midrange "Crunch" Rhythm, and a Lead channel with independent gain and master volume controls. Just like on the hardware counterpart, it features a full spread of tone controls plus the vitally important Boogie 5-band Graphic EQ section. When combined, it provides for a huge range of additional tone tweaking options that make it easy for players to easily recreate the sounds they hear in their heads.

MESA/Boogie Mark IV: An improvement on a classic, this amp from 1990 takes everything that made the Mark III the standard for Boogie tone in that era and makes it even better. Three big sounds with individual controls define the tone palette for this powerhouse of a unit. Its three channels allow it deliver an incredibly wide sonic array that stretches from sparkling clean tones to ultra high-gain lead sounds that are rich with harmonics and sustain. It's the very definition of MESA/Boogie's signature high-gain sound, and it's also the ultimate in versatility.

MESA/Boogie TransAtlantic TA-30: A decidedly British MESA/Boogie tribute that jumps back and forth across the sonic pond, this model captures the essence of what, for MESA, was an exercise in simplicity of operation and comprehensive tonal control. It features two-channel operation and 5 distinct "Mode" voicing choices that reference several classic British and American circuits. Throw in the Gain Boost feature, and two high-gain options (HI 1 and HI 2 in Channel 2), and this model covers everything from classic 60s to crushing contemporary, and everything in between. Each channel also features the flexibility of 3 levels of output power. This allows for a full range of power response and character that adds yet another level of accuracy and authenticity to its preamp sounds! This amp may be the most versatile yet simple-to-use MESA amplifier ever made, and it covers anything and everything the other models might miss due to their higher power ranges and gain structures.

In the four years since its release in 2011, AmpliTube Custom Shop has established itself as the largest collection of virtual gear on the market. Its easily browsable selection of amps, stomps, cabinets and more includes officially certified models from the likes of such legendary greats as Fender™, Ampeg®, Orange®, Soldano™, Groove Tubes®, Gallien-Krueger®, Jet City Amplification™, THD® and T-Rex®, Fulltone®, Z.Vex®, Carvin®, Morley®, Wampler Pedals®, Dr. Z®, ENGL® and more. In addition to these well-recognised brands, there's also signature gear from artists like Slash and Jimi Hendrix™. All told, there are over 280 pieces of professional-grade gear now available for trial and purchase in the AmpliTube Custom Shop!

A one stop tone shop

The AmpliTube Custom Shop for Mac/PC is a free DAW plug-in and standalone software that gives players 24/7 access to some of the most sought-after analog and digital music gear of all time. Once installed, it allows players to browse, audition and purchase collections from the world's top gear manufacturers à-la-carte. Each model can be tested for free before purchase, just like trying out an amp or effect in a physical guitar shop. Gear models are sold in the Custom Shop using Gear Credits and are priced between 5 and 30 credits each. Gear Credits are sold in packs from a minimum of 20 credits to a maximum of 1,500 credits, with individual gear models starting as low as $/€3 each!

Plugging in to a world of sound

With IK Multimedia's range of interfaces for mobile devices and Mac and PC, getting tone from AmpliTube is as simple as plugging into an amplifier. iRig 2, iRig HD and iRig PRO are IK's latest generation of interfaces that allow players to plug in and get pristine, pure sound quality from their Mac or PC (or iPhone or iPad).