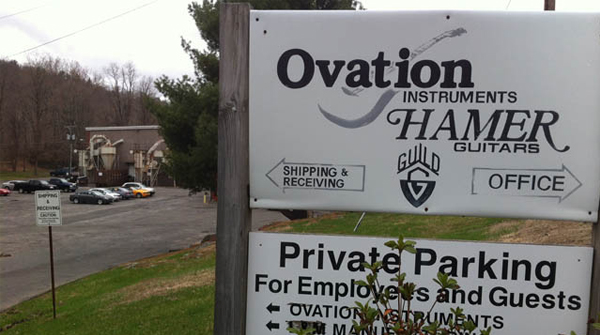 (PRESS RELEASE): The iconic Ovation Guitars Factory located in New Hartford, Connecticut has officially reopened its doors and resumed USA production of its innovative, round back, “acoustic/electric” guitars, basses, mandolins and ukuleles. The announcement was made by the company’s new owner, Oxnard, California-based instrument manufacturer Drum Workshop, Inc.  In celebration of this auspicious event, Ovation Guitar “super-fans” from around the world have been invited to the Ovation factory building on Monday, October 26th, to attend a private, acoustic performance by Kevin Cronin and members of the multiplatinum-selling rock band, REO Speedwagon. Cronin, a long-time endorser of Ovation guitars, will officially mark the reopening of the previously shuttered factory by strumming the first-off-the-line, Limited Edition 50th Anniversary Commemorative Custom Elite Guitar which will be produced exclusively in New Hartford.

“The Ovation USA factory is the foundation of the brand, and the craftsmen working there have nearly 200 years of combined knowledge of the brand. Our ‘Made in America’ philosophy is what helped build the DW brand and we firmly believe the same philosophy will help define Ovation moving forward,” explained Drum  Workshop president/CEO Chris Lombardi. “The fact that Ovation Guitars will celebrate its 50th Anniversary in its long-time home and under the stewardship of the same artisans who have contributed so much to its legacy means a great deal to us – as well as the artists and fans who have loved Ovation for half a century.”

With the reopening of its USA factory, Ovation plans a rollout of new guitar models that will retain many of the brand’s classic features including; the brand’s distinctive parabolic shape, Sitka spruce soundboards, and innovative onboard electronics. The new models will also feature exotic wood and mother of pearl inlays, as well as Ovation’s emblematic inlaid wood epaulets and multiple sound holes that increase the instrument’s volume and reduce feedback during amplification.

"In 1982 I needed an acoustic guitar that could cut through the massive REO Speedwagon live sound, but it also needed to look cool on stage. I got together with the team at Ovation and came up with the guitar I have been playing ever since...The Viper. Now in 2015, I am honored that Ovation and I have come together again to create a signature model designed in the mold of my trusty tour guitars. I am proud as ever of our long standing relationship, and very excited that Ovation is reopening its original factory in New Hartford, CT, putting American craftsmen back to work. My Ovation Vipers are loyal companions and I can't wait to see and play one with my signature etched into the headstock." says REO Speedwagon lead singer, Kevin Cronin.

The first Ovation guitar made its debut in November, 1966 and with its patented, Lyrachord body which gave the instrument unprecedented projection and ringing sustain, Ovation guitars immediately garnered favor among musicians. Later, innovative, on-board electronics were added to the instruments to create an “acoustic/electric” hybrid guitar that allowed guitarists to move about the stage rather than stay in front of a microphone. The combination of superior resonance and mobility made Ovation guitars ideal for live performances. Throughout the company’s history, Ovation’s unique craftsmanship and distinctive look has made the brand a favorite of such legendary artists as Glen Campbell, Melissa Etheridge, Mick Jagger, John Lennon, Richie Sambora, Shania Twain and Jimmy Page among others.