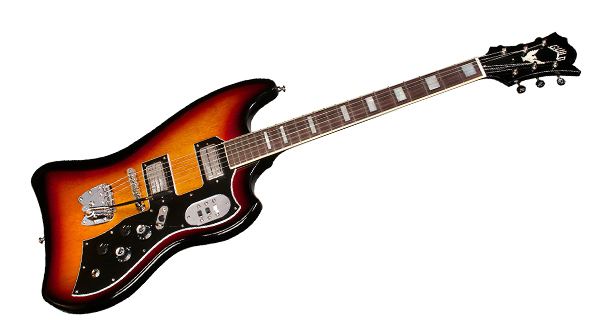 (PRESS RELEASE): Guild is thrilled to announce the highly anticipated reintroduction of one of its most iconic, uniquely recognizable guitars: the S-200 T-Bird. This reissue is a replica of the original versions produced between 1964 and 1968, featuring an asymmetrical all mahogany body sure to catch the eye of the guitarist looking to blaze his or her own trail. However, this guitar’s appeal isn’t just about its looks – its unique controls create the widest variety of tones offered on any Guild instrument, drawing on its dual Guild LB-1 Little Bucker pickups to achieve almost every conceivable color on the palette.

The LB-1s are replicas of Guild’s original humbuckers, offering an array of tones from sparkly clean single coil-esque spank to thick and warm humbucker sounds that fatten and sing when driven. Switching capabilities include rhythm or lead modes, pickup on/off, and standard volume and tone controls. When engaged, an optional tone capacitor creates single-coil tones while maintaining the hum-free reliability of the LB-1s.

The T-Bird also features a Hagstrom Vintage Tremar, a reissue of the vibrato system featured on many of Guild's solid body electric models from the 1960s. The Tremar’s fully adjustable spring allows everything from smooth bends and vibratos to a more stable hard-tail feel.