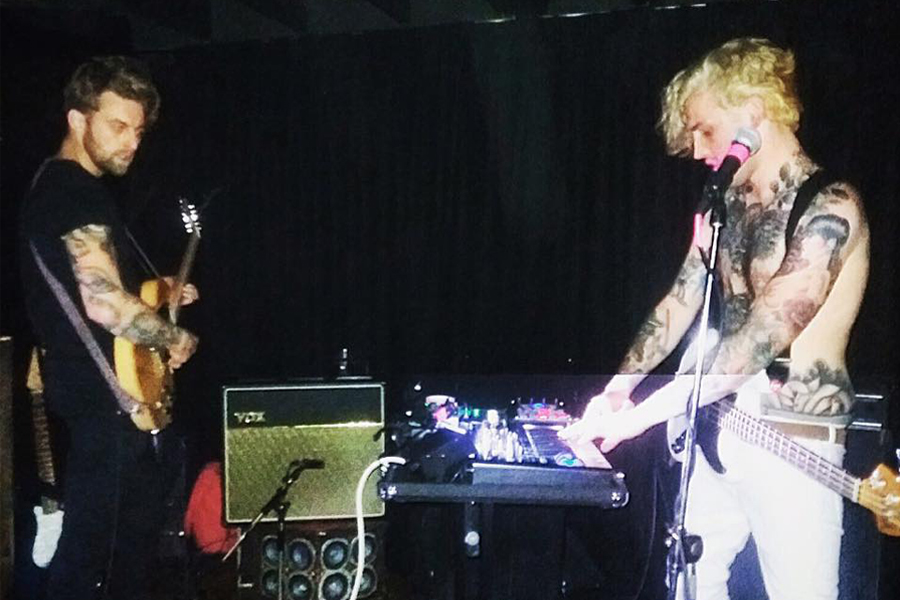 On a relatively quiet North London street sits a quaint but cool little venue named the Servant Jazz Quarters. At capacity the venue probably holds around 100 people without taking fire regulations into account. One Sunday night in early March this small, kooky Dalston bar played host to a brand new outfit, a 2 piece, no-nonsense noise rock duo by the name of Tayne.

The project, fronted by Matthew Sutton, former guitarist of It Was All A Bit Black And White, has largely been kept under wraps since forming at the start of the year. Apart from the one single release, 'Heartbeat', Sunday's set provided those in attendance with a glimpse of what's to come with regards to Tayne. And it was sure some glimpse.

Dressed head to toe in black and white, Sutton was donning all white asides from a smear of florescent pink lipstick, whilst guitarist Tom Hancock rocked an all black look, the duo were quickly enclosed by a medley of effects equipment consisting of a Roland TR-8 drum machine, SP404 sample workstation station a TC Helicon VoiceLive Play and a various delay and overdrive pedals almost as quick as they appeared on stage. After announcing who they were Sutton, with a Fender Jazz Man slung over his shoulder and smeared in florescent lipstick, and Hancock, eerily lurking in one corner clutching an ash-bodied Gibson Les Paul amongst a plume of pink smoke, ripped into their opener.

‘Breath’ was an appropriate choice for their first track of the evening engulfing the crowd in turbulent, jagged guitar and bass riffs backed by tribal drum patterns emanating from the TR-8. This quickly injected a shot of adrenaline into the front row which soon resonated throughout the crowd. As the set segued into the next number, ‘Heartbeat’, Sutton had no time for any respite as restless synth lines rained down and turbo charged drum patterns took hold. The pair then churned into an outrageous, drone-rock cover of ‘Dreams’ by Fleetwood Mac which personified Tayne’s experimental nature. As smoke continued to fill the basement, the music became harsher and the Irish born frontman’s persona was becoming even more erratic fitting for the fidgety intro of ’Alive’ a track laden with punishing vocals frantic drums and sharp, meticulously placed licks. 'Figure It Out' followed providing a caustic mix of droning synths and descending bass harmonies. It was during the penultimate track that it became apparent how Matt’s rough-edged, fallen angel like vocals were reminiscent of a Cats Eyes era Faris Badwan's, however the music sits juxtaposed between math and noise rock. Imagine if Trent Reznor accosted the Foals in a darkened back alley, Tayne's sound would make for a fitting soundtrack for the encounter. But whilst his voice may remind some of Badwans, his stage antics were more in line of GG Allin as mid verse during the final track of the evening he proceeded to crack his skull with the microphone causing a split across his forehead which attracted a few concerned looks from members. As blood trickled from his head Tayne closed the show in abrupt fashion, ambling off to stage as large sections of the crowd attempting to get a better look as Sutton's now gushing head wound.