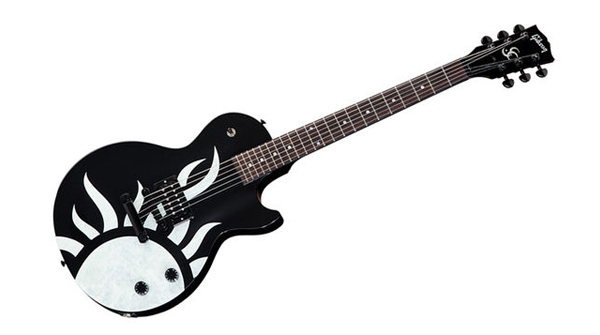 Both as the leader of the chart-topping band Godsmack, and morerecently, as an acclaimed solo artist, Sully Erna has racked up oneof the most impressive resumes in contemporary rock. The band'sself-titled 1998 debut album went platinum five times over, andthree following releases debuted consecutively at #1 on theBillboard album chart, helping the band to sell more than 15million albums worldwide in the process. Through it all, Sully Ernahas established a look and a tone that are emblematic of heavy rockfor the 21st century-an image that Gibson USA captures in spades inthe new Sully Erna Godsmack Les Paul.

In addition to beautifully embodying the image of this powerfulartist, the Sully Erna Godsmack Les Paul also nails his unique anduncompromising sound. Special touches include an Ebony Black finishwith pearlescent white Godsmack sun emblem, subtle double-star 12thfret inlays, hot-stamped signature truss-rod cover, and a SullyErna moon-and-star emblem on the headstock. Among the sonicsurprises hidden within this stripped-down Les Paul are a built-inflanger accessed by a push-pull switch on the master tone pot, anda kill switch in the traditional toggle selector position. Put itall together, and the Sully Erna Godsmack Les Paul is a powerfulstatement in the eyes and ears of all who behold it, and a guitartotally fitting for this uncompromising artist.

A traditional foundation ensures the Sully Erna Godsmack LesPaul's sonic success right from the start. A carved solid maple toplends bite and articulation to the sound, while a select mahoganyback-treated with Gibson's new modern weight relief pattern toincrease playing comfort and enhance resonance-contributes superbwarmth and depth. A solid, quarter-sawn mahogany neck is glued inand carved in a comfortably rounded '50s profile that measures0.818" at the 1st fret and 0.963" at the 12th, and topped with ablack bound Grade-A rosewood fingerboard with 22 medium-jumbo fretsand simple dot position markers, plus subtle double stars at the12th fret. A black Corian™ nut is cut on Gibson's PLEK for optimumprecision.

The stripped-down ethos and outward simplicity of the Sully ErnaGodsmack Les Paul belies a powerful sonic punch lurking within.It's single '57 Classic Plus pickup yields everything frombone-breaking crunch to eviscerating leads when used on its own,but just pop the push-pull switch on the tone control to unleashthe built-in flanger circuit for instant Godsmack atmospherics.Adding further drama to your playing, the toggle-switch on thissingle-pickup Les Paul is actually kill switch to mute the guitar'soutput for rhythmic stutter effects.

A set of genuine Grover™ tuners partners up with the classicpairing of Tune-o-matic bridge and stopbar tailpiece for smooth andefficient tuning and intonation married to solid sustain. Allhardware is black, in keeping with the stunning look of thisguitar. The truss-rod cover it hot-stamped with Sully Erna'ssignature, and to avoid obstructing any part of its unique finish,the Sully Erna Godsmack Les Paul comes without a pickguard.