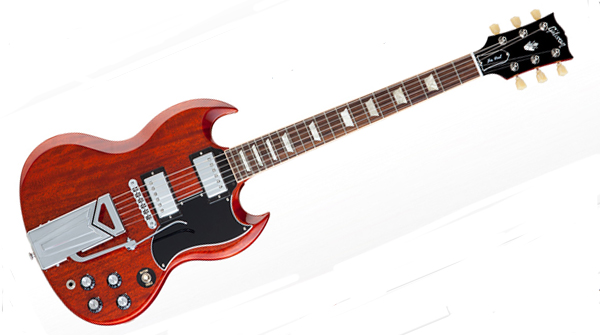 In 1961, Gibson took a quantum leap forward in style and design by updating the traditional single-cutaway Les Paul to a sleek new double-cutaway design, known simply as the SG Standard after 1962. The guitar has been a rock essential ever since.

This SG and its descendants have made legendary music in the hands of countless major artists—Eric Clapton, Robby Krieger, Angus Young, Derek Trucks, and more—because to this day the Les Paul/SG remains a forerunner for tone, feel and looks. Capturing the original vibe of the 1961 Les Paul/SG in all its glory, but with significant improvements that bring it into the 21st century, Gibson USA introduces the 1961 Les Paul Tribute—a guitar that can take you back to the dawn of rock, or thrust you forward into the future of music.

An undeniable classic, the original Les Paul/SG Standard of 1961-’62 was released with one well-recognized flaw: its stylish Deluxe Vibrato unit (commonly known as the “Sideways Vibrato” for its side-to-side action) never functioned quite as smoothly or accurately as intended. Now Gibson USA has not only recreated this legendary guitar in all its period-correct glory, but totally re-engineered the Sideways Vibrato for smooth, efficient action with perfect pitch return.

While the 1961 Les Paul Tribute retains the magic of the original by capturing every nuance of this highly desirable vintage guitar, it also soars to new heights of tone and performance.

A body and neck crafted from lightweight Grade-A mahogany in the archetypal double-cutaway style with beveled edges results in superb playing comfort, as well as outstanding resonance and sustain. Gibson USA selects dark one-piece, Grade-A rosewood to give the fingerboard a traditional look and feel, then loads the guitar with vintage-correct hardware, two PAF-style ’57 Classic humbucking pickups, and historically accurate plastics.

Topped with a high-gloss Heritage Cherry finish in hand-sprayed nitrocellulose, the ’61 Les Paul/SG Standard resurrects a hallowed classic from more than five decades ago—and puts a smile on your face when you dig into that vibrato. Experience the beauty, feel and playability of this rock legend today at your Gibson USA dealer.

Like the original 1961 Les Paul/SG, the 1961 Les Paul Tribute has a body crafted from solid mahogany in the asymmetrical “double-horned” deep double-cutaway design. Coupled with the SG’s characteristic beveled body edge—a big part of this model's distinctive styling—the mahogany’s light weight also enhances playing comfort, and the fine grain of the Grade-A tonewood used beneath the semi-transparent Heritage Cherry finish looks superb. The guitar’s quarter-sawn mahogany neck is carved in a slim but rounded profile that measures 0.800” at the 1st fret and 0.895” at the 12th. It’s glued into the body with Gibson’s acclaimed mortise-and-tenon neck joint, and topped with a rich brown Grade-A rosewood fingerboard sporting 22 jumbo frets and vintage cream binding. Acrylic trapezoid fingerboard inlays, accompanied by a mother-of-pearl headstock logo and holly inlay, round out the guitar’s stunning visuals.

To capture the full-throated tone of the 1961 Les Paul Tribute, Gibson USA loads it with a pair of the most accurate PAF-styled humbuckers available today. The ’57 Classics in the neck and bridge positions are made with genuine Alnico II magnets, and wound with 42-AWG enamel-coated wire. To complement today’s high-volume music, the coils are wax potted to combat microphonic squeal. Routed through the classic configuration of an independent volume and tone control for each pickup and a three-way toggle switch, this pair gives you warm yet articulate voices from the neck position, crunchy yet singing bridge tones, and sweet round sounds in between.