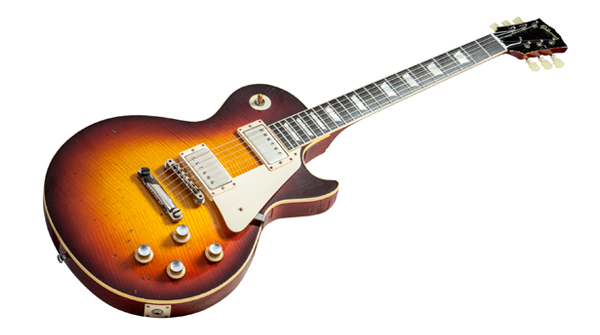 Gibson Custom first debuted its Collector’s Choice guitar #18, a stunning reproduction of the original 1960 Les Paul #0-1167 or the “Dutchburst”, at this year's Frankfurt Musikmesse.

The original “Dutchburst,” an exceptionally rare guitar boasting a fascinating history, is now owned by Robbert van der Ende, who acquired the guitar from its original owner’s son in 2012. Every feature on the original guitar has been artfully captured and painstakingly recreated by Gibson craftsmen in this limited edition run of 300 guitars.

Mr. van der Ende joined fans at the Gibson Brands booth  today at Frankfurt’s Musikmesse to talk about the iconic instrument and showcase the original and the new Dutchburst.

The “Dutchburst” exhibits immense character, along with a unique personality as one of the exceptionally rare special order guitars from Gibson at that time.  The original owner, Jan, a working musician from Holland played this 1960 Les Paul on cruise ships as part of a jazz trio, relying on the Dutchburst his entire career.

“Dutchburst’s” late ’60 slim taper neck represents the transition away from the fatter neck of the ’59, making it a very playable, “fast”, neck.  Its pickups, faithfully measured and reproduced for Collector’s Choice #18, exhibit an ideal balance between the neck and bridge, allowing both clarity when played clean and a sweet, mellow “growl” when driven to distortion.  In all, it’s a very natural sounding guitar, with an acoustic quality of tone that shines through, making it flexible in a myriad of playing styles.

The guitar’s finish is heavily worn, boasting deep, coffee to caramel transition of the burst reflects what would have been a special order Darkburst at the time.   These details, along with the story behind them, come together into a guitar whose recreation Gibso Custom is immensely proud of.

More information is available at Gibson