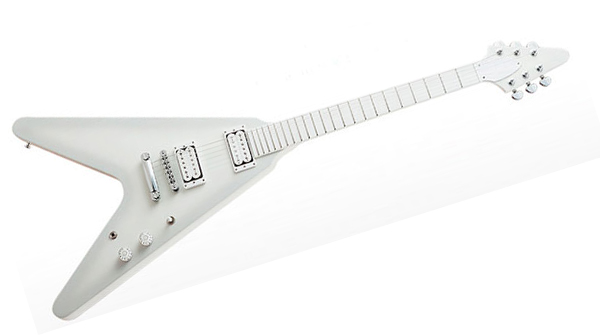 Even if the hardest-rocking mayhem merchants in the world of metal might be animated, their eviscerating new guitar is extremely real. Created for the co-creator of Adult Swim’s Metalocalypse, Brendon Small—and the new signature guitar of character Toki Wartooth—the Snow Falcon Flying V epitomizes everything you could want in a great shred machine, from stunning looks to uncompromising tone.

Just as real as this deadly new weapon in the Dethklok arsenal are Brendon Small’s chops as a composer and performer. Having studied music at Boston’s Berklee College of Music (during which he also took writing and comedy classes at nearby Emerson College), Small not only co-writes the animated comedy series, but voices several characters, while writing and performing all the music for the show’s star band, Dethklok. Crafted in the style of the original radical rock axe, the Brendon Small Snow Falcon Flying V is everything this versatile player needs in a high-performance metal machine—and it just might be perfect for you, too.

The Brendon Small Snow Falcon Flying V is packed with classic rock tone, but its dramatic looks are likely to grab you first. The stand-out feature here is the all-white fingerboard, created by laminating white polymer to a baked-maple ’board. Joined with the high-gloss “snow burst” body finish, white plastics, a back-of-headstock Snow Falcon graphic, and chrome hardware, the result is a look that will get you noticed on any stage. Tone is assured by a pair of Gibson’s acclaimed BurstBucker humbucking pickups, with independent push-pull coil-split switching for optimum sonic versatility. Premium hardware, a sublime playing feel, and that unparalleled Gibson build quality complete the package.