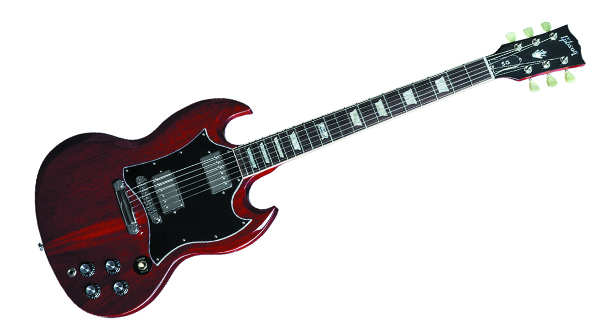 In celebration of its 120th Anniversary, Gibson USA is rolling out a series of Limited Run guitars, all of which marry classic specs and features with exclusive commemorative details. The SG Standard 120 nails the look, feel and sound of one of the most popular SGs ever made, with top-notch tonewoods, pickups, and hardware to deliver powerful, versatile SG performance.

The foundation is set by a Grade-A mahogany body and neck, plus a one-piece Grade-A rosewood fingerboard with frets over binding and traditional trapezoid inlays. The holly headstock inlay is joined by a “120th Anniversary” banner at the 12th fret, while the mid-’60s style 5-ply pickguard holds two of Gibson’s most popular humbucking pickups: a 490R in the neck position, and a more powerful 498T in the bridge. A chrome Tune-o-matic bridge and stopbar tailpiece partner with vintage tuners to lock it all down in classic style, and the SG Standard 120 comes protected in an elegant brown hardshell case. Throw in the Heritage Cherry in hand-sprayed high gloss nitrocellulose lacquer and this a great way to celebrate 120 years of the world’s most influential guitars.