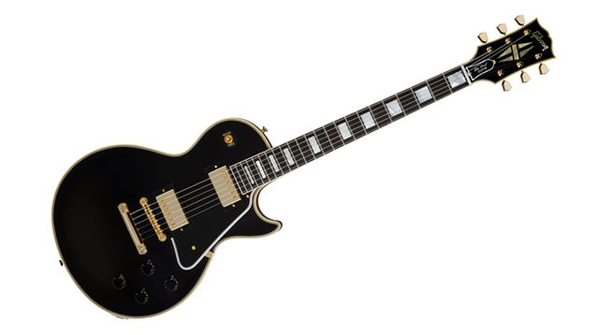 To kick off a very limited edition series of three guitars thatcelebrate the 20th Anniversary of the Historic Reissues series,Gibson Custom presents the 20th Anniversary 1957 Les Paul BlackBeauty-often considered the epitome of the "Black Beauty," and thefirst of the elegant Customs to carry the new PAF humbuckingpickups.

In addition to being both a stunning, period-correct recreationof the '57 Les Paul Custom and a collectable Anniversary model,this 1957 Black Beauty marks two very significant milestones.First, it is the inaugural guitar in a series that will be offeredonly in 2013. Limited to 100 pieces of each model, each in theseries is unique and extremely rare. Second, this guitar is thefirst run of instruments to be made with one-piece ebonyfingerboards since November of 2011, and is likely to be one of thevery last.

With its antique ebony finish, gold-plated hardware, and classicBlack Beauty appointments-including multi-ply body and headstockbinding, pearl block fingerboard inlays and split-diamond headstockinlay-the 20th Anniversary 1957 Les Paul Black Beauty is a gorgeousinstrument by any standards. Add to that its 20th Anniversarymedallion, which covers the toggle switch access on the guitar'sback; a custom fitted dust cover with a retro 1993 Gibson Customlogo; and a one-of-a-kind, hand-made framed Certificate ofAuthenticity, and you have a unique and memorable instrument worthyof this milestone in Gibson history. Also, to help ensure that theexclusive 100 owners of this special guitar can keep it in "likenew" condition for years to come, we even include a pair of whitegloves.

But don't be afraid to rock out, either. The 20th Anniversary1957 Les Paul Black Beauty is primed for tone just as much as it isfor looks, with a pair of Alnico III-loaded Custom Buckers, asolid, one-piece mahogany body, a quarter-sawn mahogany neck withrounded '50s profile, and Gibson's acclaimed hardware set,including period-correct "waffle back" tuners. Furthermore, thislimited edition Black Beauty benefits from Gibson Custom's 20thAnniversary Specifications, adopted for 2013, so the guitar'sdeep-set neck tenon is attached with genuine hot-hide glue, and itcarries a Historic Truss Rod assembly with no tubing. Contact yourauthorized Gibson Custom dealer today to get your hands on a truepiece of Gibson history.

In keeping with the original '57 Les Paul Custom, the 20thAnniversary 1957 Les Paul Black Beauty has a one-piece body ofsolid mahogany with a carved top, finished in Antique Ebony innitrocellulose lacquer. It's quarter-sawn mahogany neck is carvedto a full, rounded '50s profile and is topped with a genuine,one-piece ebony fingerboard with pearl block inlays and 22medium-jumbo frets. Its Custom-profile headstock is trimmed inmulti-ply binding and carries a mother-of-pearl split-diamondinlay.