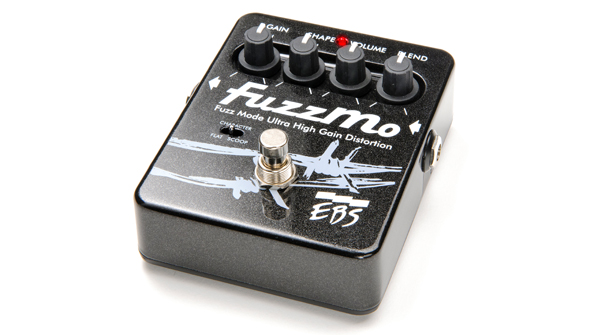 Guitar Interactive along with EBS Sweden has launched an exclusive Facebook competition today which gives players and subscribers to Gi the chance to win an EBS FuzzMo pedal every Friday throughout November.

The Swedish bass brand has very kindly given us not one but FOUR of their awesome FuzzMo pedals to give away on the following dates 8th, 15th, 22nd and 29th.

To be in with a chance of claiming one of the four EBS FuzzMo pedals then potential winners will need to be fully subscribed to Guitar Interactive Magazine. A winner will then be picked at random the following weekend and announced on the Tuesday.

To stand more chance of winning then be sure to ‘share’ and ‘like’ each of the competition posts and you will then receive a second (for a like) and third (for a share) entry, meaning you’ll be three times more likely to win. Good luck!

The EBS FuzzMo pedal is developed by EBS to fill the gap between EBS excellent distortion pedals and a vintage type of fuzz effect for bass. The pedal produces a wide range of vintage and modern effects with several features to dial-in your favourite fuzz tone.

Similar to the Billy Sheehan Signature Drive, you can blend the fuzz tone with a clean signal. Fire up the distortion engine gain as much as you like with the Gain control, set the Volume for the distortion and then blend in the clean unaffected tone by turning up the Blend control. Instead of a tone control, the EBS FuzzMo features a Shape control that changes the shape of the gain engine, from triangle to square wave through the passive tone stack.

If the controls do not offer enough flexibility, this pedal also feature a Character filter. This goes in three steps from flat, to subtle mid-scoop, to maximum mid-scoop (or cut).