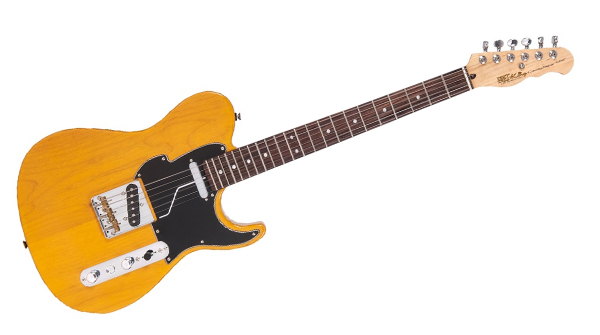 Combining the detail of British design aesthetic, with the cutting edge of US technology, the new Fret-King Fluence Series guitars make for a truly 'Special Relationship' between Fret-King guitars and Fishman USA.

Available in three of the most popular Fret-King models, all fitted with Fishman's amazing Fluence pickups systems - which are based on the most iconic pickup designs of the last 70 years, with the additional advantage of optional voicing at the flick of the switch and free of the noise and interference problems of vintage pickups - these new guitars offer the modern guitarist a whole range of classic tones all wrapped in incredibly playable and responsive package.

The Fret-King Corona 'Fluence' FKV6F-OCB gives a 21st century makeover without losing any of the nuances that this classic guitar style is revered for. Using a centre joined two-piece American Alder body and mating it to a Canadian Hard-Rock Maple neck, the Corona has a solid base on which to build its tonal palette. The Wilkinson WV6SB Bridge and Wilkinson E-Z Lok machine heads provide superb sustain and unparalleled tuning stability, making the set of three Fishman Fluence Single Width pickups and its inbuilt rechargeable battery pack the icing on the cake for this magnificent instrument. The push/pull tone control, gives the player the ability to switch instantly from a classic true single-coil output, to an overwound, steroid-infused monster tone, all without the noise and buzz of the dreaded 60 cycle hum that can sometimes plague the standard pickup design. Finished in a traditional Original Classic Burst the Fret-King Fluence looks as good as it sounds and plays.

The Butterscotch finished Fret-King Country Squire 'Fluence' FKV2F-BS uses the same tone wood mix of Alder, and Maple, combined with a Wilkinson innovative WTB bridge that provides a traditional 3 saddle design for the very best sustain and tonal transfer. The Fishman Fluence pickup system and rechargeable battery pack again gives the player a choice of of the very best guitar sounds, combining the clear, warm presence of a standard single coil and then taking 'over the top' via the push/pull pot into a muscular, hot Texas overdrive, without losing those precious highs.

Resplendent in a Gloss Black finish the Fret-King Esprit V 'Fluence's solid Agathis body and easy-access Maple set-neck give the player the absolutely best possible sustain and tone via the Wilkinson direct mounted Tune-O-Matic style bridge and stop tailpiece. Fitted with Fishman Fluence humbuckers at the bridge, and neck position, these Nickel covered pickups move seamlessly from a classic calibrated PAF tone, imbubed with all the up-front dynamics that guitarists have come to expect from this kind of pickup, to the hot-rodded rock tone that defined the lead guitar via the push/pull pot. This Fishman Fluence pickup set is powered by a single 9v battery.

Check out the Fret-King Fluence Guitars at JHS/RBI Music Booth 5279.