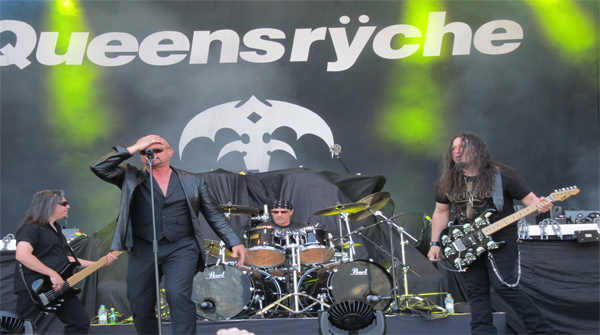 Former Queensryche frontman, Geoff Tate has had a tough 2012 so far. After initially being fired from the prog-metal outfit after he reportedly attacked fellow band mates prior to a show at HSBC in Sao Paulo, he has also just lost a court ruling to stop them from using the name.

However, the German born metal idol has just unveiled his new band that includes none other than Rudy Sarzo (Ozzy Osbourne & Quiet Riot), Bobby Blotzer (Ratt) and Glen Drover (Megadeth).

Tate had this to say (via MetalTalk):

"I'm sure the last few months have been very frustrating for you. I know they have been for me. It's said that adversity makes one stronger. I'm definitely in a better place now than I've ever been before.

"Today is a new day and I am thrilled to announce the new Queensryche. Together we shall embark on a new musical journey that will be a greater extension of where Queensryche has ever been.

"It's a whole new scene. There are new ideas, different musical backgrounds and a whole new set of parameters. Everyone has ideas you haven't heard before.

"I look forward to this new life and I hope to see you on tour."

Discussing the three decades he spent fronting the band, he said:

"The challenge, when you're in a creative environment, is keeping things fresh and invigorating. After working with the same people for thirty years it gets very difficult.

"You walk into the room and everybody knows what everyone is going to do. There's no spark - the chemistry is very tried and true and you just keep coming up with the same ways of expressing yourself."

Last week Tate said his dismissal from Queensryche had been a "betrayal."

The remaining three original members of Queensryche along with Parker Lundgren are currently working on new material with singer Todd La Torre. They're set to perform at Rock The Bay with Accept, Dokken and Michael Schenker Group in Texas on October 12. They will then play at the Snoqualme Casino, Washington, on October 27.