Five of the Most Unusual Custom Guitars Ever Built 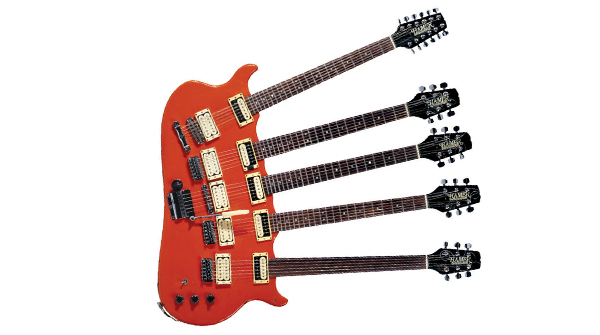 Designed in-between DLR's Eat Em and Smile & Skyscraper albums and making its first appearance in the David Lee Roth's 1988 music video for "Just Like Paradise". The 'unique' luminous pink guitar featuring two six-string necks and a twelve-string was, in fact, one of a pair of instruments built for Vai by Ibanez.

The original can now be seen at the Hard Rock Cafe in Los Angeles, with its twin raffled by Steve's nonprofit charity, the Make A Noise Foundation in 2001.

With both the six-string neck facing away and the twelve-string tuned to a chord, Vai "Fever Dream."

After realising in the late 1980's that he only actually used the E and A string while performing, Stig Pedersen of Danish rock band D-A-D (Disneyland After Dark), decided to lose the unwanted strings and let his imagination guide him. This was one of the results.

As well as instruments that look like Rockets, Automobiles and even a giant olive, Stig has also been seen using a single-string bass at the band's shows.

Created for Pat Metheny in 1984 by luthier Linda Manzer with the instruction to, "build a guitar with as many strings as possible". The amazing result is "Pikasso".

Metheny first used the forty-two-string guitar on "Mob Job", from his 1986 record Song X, and has been in regular use in his live shows ever since. However, the jazz legend recently stated that even after 30 years, he is still learning how to use it.

As well as being associated with the "Double Guitar" (an instrument that allows the player to use both hands simultaneously on two separate guitar necks), Michael Angelo also conceived and designed the "Quad Guitar". Built by Wayne Charvel in California. The instrument is made up of two seven-strings guitars up top and two regular six-strings on the bottom.

Batio used the guitar in the music video for Nitro's "Freight Train" in 1989, however, later that same year it was stolen after a show in El Paso, Texas.

Mysteriously, the top half of the "Quad" was returned to Michael Angelo by a fan fifteen years later, after it ending up in the United Kingdom.

The latest incarnation of the "Quad Guitar" was built by Dean Guitars in 2008.

Nielsen has owned around two thousand guitars over his career, however, arguably no guitar is more associated with him than the five-necks.

The idea for the instrument came out of early Cheap Trick shows, where during a solo, Rick would play one guitar for a section, then throw it away to play the one hanging underneath and stack up as many as five guitars. Eventually, this part of the show gave birth to the prospect of building a multi-necked guitar, with the original concept (that was never completed) being a six-neck that spun like a roulette wheel.

A total of three Hamer five-necks were produced for Nielsen, with the original orange one built in 1981 now residing on a wall at the rocker's restaurant in Chicago.